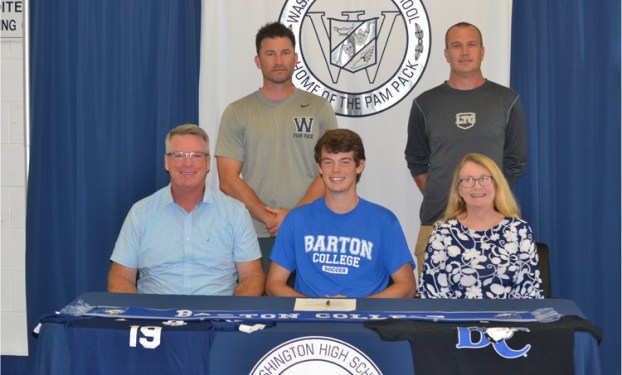 INKED: Washington’s Tim Anglim signed his letter of intent to Barton College with his family, friends and coaches by his side Wednesday afternoon. (Mitchell Thomas / Daily News)

WASHINGTON — Another product of Washington High School is on his way to play ball at the next level. Tim Anglim signed his letter of intent to play soccer at Barton College with family, friends and coaches by his side on Tuesday afternoon at Washington.

Anglim, who has been playing soccer since he was 3 years old, was a part of a 15-win season for Washington this year. He scored more than 20 goals in his senior season for the Pam Pack, and he’ll head to Barton to play the wing or possibly the center-mid field position for the Bulldogs.

“Over the summer I definitely have to work on stamina, getting in shape and just keep my foot on a ball,” Anglim said. “If I go out there rusty, I’m not going to be traveling with them. You have to make the travel team before you start getting any playing time.”

With close to 30 players on the Barton roster, only 20 travel with the team. So Anglim will immediately have to compete to travel and get some potential playing time early on. However, Anglim’s family and coaches have never questioned his work ethic.

“They’re getting a great overall, all-around player,” head soccer coach Jim Kozuch said. “He busted his butt everyday. Hopefully, he’ll go in there and compete for a spot right away. I think he’s got what it takes to possibly steal a starting spot right away.”

Nate Burns has been coaching and training Anglim through every summer since he was in seventh grade. He also prepared him for the Olympic Development Program, in which Anglim made the North Carolina team as well as the powerade state games.

“He’s a fantastic athlete with a great work ethic,” Burns said. “He can help (Barton) right away. If he doesn’t play early, then he’ll at least be pushing the people ahead of him to get better, because he will threaten some people. He’s an excellent teammate and wants everybody to be good. He gives 110% every day.”

Anglim reminisced on one of his favorite sports memory in his four years at Washington.

“The time our (junior varsity) coach ran out of gas on the way to one of our games,” Tim Anglim said. “Other than that, it was making it to state as a freshman. I got pulled up and just that whole experience was awesome.”

His parents, Tom and Kim Anglim, were beyond proud of their son. Tom Anglim coached Tim Anglim for much of his younger career, as well as his older sisters.

“We’re very proud of him,” Tom Anglim said. “He’s smart, calm and he’s dedicated. He will do whatever it takes for the team to be successful.”

Washington softball slides into fourth round

WASHINGTON — The Pam Pack hosted a first inning hit parade, as they scored 15 runs in the first frame to... read more