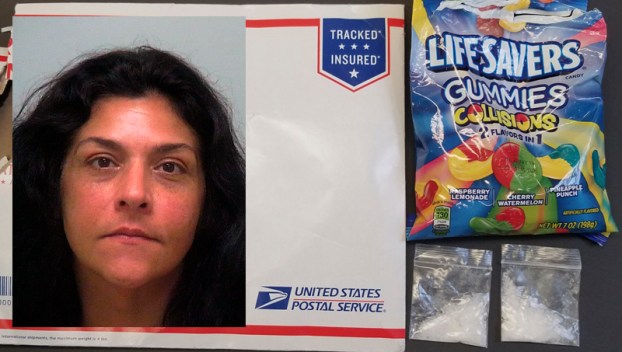 SPECIAL DELIVERY: Two bags of meth sent via mail were hidden inside a bag of Lifesaver Gummies that had been opened and resealed. (Beaufort County Sheriff's Office)

A Washington woman faces drug charges this week after the Beaufort County Sheriff’s Office says she received methamphetamine from out of state via the U.S. Postal Service.

Lori Murphy, 50, of 717 Dan Taylor Road, was charged with possession with intent to sell and deliver methamphetamine and possession of drug paraphernalia after a postal package containing two bags of meth was delivered to her home.

According to a BCSO press release, the sender had concealed the drugs in a package of Lifesaver Gummies that had been opened and resealed. Investigators had previously made purchases of meth from Murphy and began surveillance after learning she was receiving the drugs by mail.

Murphy was held on a $13,000 secured bond in the Beaufort County Detention Center. Davenport said the BCSO is working to identify where the drugs came from.

“It’s a lot less risk for people to have drugs delivered by mail,” BCSO Drug Unit Lt. Russell Davenport said. “When they’re hauling it down the road or somebody else is shipping it down the road, it’s a great risk that they may get stopped and be in possession of drugs … Not only do we see meth, we get cocaine, we get marijuana — we get every type of drug there is through the mail.”

The arrest last week was not Murphy’s first encounter with the BCSO Drug Unit. On Dec. 11, 2018, investigators charged Murphy with three counts of possession with intent to sell and deliver methamphetamine, maintaining a dwelling place for the purpose of selling and storing a controlled substance and possession of drug paraphernalia. During that search, deputies found approximately 10.5 grams of meth, plastic bags used for packaging and two digital scales.

Davenport said charges from that arrest are still pending based on the results of the state crime lab, which can take between eight months and a year.

Local nonprofit to raise funds for families in need

By SABRINA BERNDT Washington Daily News A local nonprofit is calling on Washington to help raise money for a good... read more