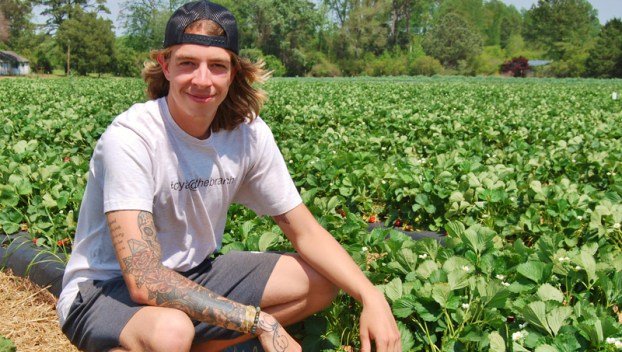 STRAWBERRY SEASON: Billy Harding has taken over management of Southside Farms in Chocowinity, just in time for a bountiful and delicious strawberry harvest. (Kevin Scott Cutler)

CHOCOWINITY — There’s a new “strawberry king” in Chocowinity, but he’s no stranger to the fields at Southside Farms.

Billy Harding assumed management of the family-owned farm after his parents, Shawn and Tracey Harding, moved to Raleigh when his father took a job with Farm Bureau Insurance. The Harding family founded the business 20 years ago.

“I’ve been helping with strawberries ever since we opened,” recalled Harding, now 26. That means he was but a young lad when he began following in his family’s farming footsteps.

“I was ready to go to work, and I didn’t want to do any more school,” Harding said with a laugh. “I studied plant science, animal science, accounting. … It was very useful for something like this.”

The young farmer credits other family members and a hardworking staff for the successes of this first season under his direction. They work side by side with him on everything from frost protection, feeding, watering, harvesting and the running of the farm market in Chocowinity. His parents usually come home every other weekend and pitch in, as well.

Harding noted that his grandmother, Betty Harding Weeks, is one reason customers keep coming back to Southside Farms. She is in charge of the homemade ice cream aspect of the venture, utilizing her own special recipe and fresh strawberries to make the treat on site.

“We make it as fast as we can make it,” Harding said. “We might expand the ice cream operation in the next few years.”

Southside Farms grew 55,000 strawberry plants this season, covering three acres. The Hardings hope to harvest an average of two pounds of fresh berries from each plant. The berries can be purchased already picked, or customers can make an adventure of it, grab a basket and harvest their own. Strawberry season is expected to run until late May or early June, depending on the weather, according to Harding.

Following the “if it isn’t broken, don’t fix it” concept, Harding expects to make very few changes in the business. If anything, he hopes to improve and expand the produce grown on the farm.

The farm market still sells flowers and plants, tomatoes, jellies and jams, salsa, salad dressings and other items customers have enjoyed over the years. Produce this year will include blueberries, watermelons, blackberries, cantaloupes, peas, beans, corn, pumpkins, mums and even a crop of sunflowers.

“Pretty much any vegetable you like, we try to grow,” Harding noted.

Along with its own produce market, located at 320 Harding Lane in Chocowinity,

Southside Farms sells its wares at Pamlico Plaza in Washington, the Uptown Umbrella Market in Greenville and Saturday Market in downtown Washington. The Chocowinity location is open Mondays through Saturdays, 8 a.m. to 6 p.m. For more information, call 252-946-2487.

How is the best way to enjoy fresh Beaufort County strawberries? You decide, from among these recipes courtesy the N.C. Department of Agriculture & Consumer Services…

Choose the largest strawberries first. Wash and cap the strawberries. Cut off the top of the berry so it will sit flat. With a melon baller, scoop out the center of the strawberry, leaving the outer edge intact. Turn berries upside down to drain on a paper towel while making the filling. Cream together cream cheese, sugar, both extracts and half of the lemon zest. Place in a piping bag and fill the strawberries. Dust strawberries with cocoa powder and top with remaining lemon zest.

Vidant Beaufort Hospital is proud to announce Camille Jones as the recipient of the second-annual Susan Gerard Excellence in Leadership... read more