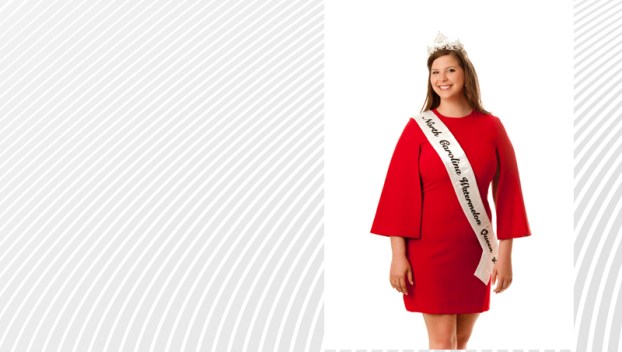 WATERMELON ROYALTY: Amy Arnold, of Arnold Farms in Washington, will serve as the 2019 N.C. Watermelon Queen, representing the industry throughout North Carolina and beyond. (North Carolina Watermelon Association)

“When I was younger, my parents wanted my brother and I to learn people and business skills,” Arnold said. “So every summer, we raised watermelons. I grew up on the side of the road, right there on Highway 17, outside of town, selling watermelon, so I’ve always been passionate about this particular crop. As I got older, I heard about the queen opportunity and as someone who loves agriculture, and loves watermelons and loves my state, I was just hooked.”

During the coming year, Arnold will travel throughout North Carolina and beyond serving as a spokesperson for the watermelon industry, appearing at festivals, farmer’s market watermelon days and a variety of events.

With produce growers on her mother’s side of the family and her father’s family specializing in tobacco and grain, Arnold has a passion for all forms of agriculture, and hopes to use her platform to celebrate the industry.

While she doesn’t describe herself as a typical “pageant girl,” Arnold was involved in theatre at Washington High School and participated in the Miss Independence pageant in Belhaven when she was a teenager. She also played violin in the orchestra and took part in the public speaking contest with the WHS Future Farmers of America. Arnold says all of these experiences have helped build her confidence.

It’s a slightly different take on the traditional pageant format. Of course, there’s an interview, a public speaking portion and potential Watermelon Queens are asked to model their evening gowns — they’re also asked to participate in a seed-spitting contest, just for fun.

“That’s the fun thing about the watermelon queens,” Arnold said. “We can get down there and get our faces covered in watermelons and have a good time with everybody. That’s what they really want us to be is relatable and a kind face that people will help people remember the watermelon story.”

Arnold, 22, is a recent graduate of N.C. State University where she earned her degree in horticultural science. This fall, amidst her Watermelon Queen duties, she will begin work on her master’s degree in landscape architecture.

While an undergraduate at North Carolina State University, Arnold served as a member of the NCSU Agri-Life Council, Agronomy Club, N.C. Farm Bureau Young Farmers & Ranchers and as a student advisor to the Dean of the College of Ag and Life Sciences. In her spare time, she enjoys scuba diving, painting, outdoor activities and volunteering in her community.

In 2020, she will represent North Carolina in a competition for the title of National Watermelon Queen at the National Watermelon Convention in Orlando, Florida. Next month, Arnold will make her first public appearance locally at the Washington Summer Festival.

Three lawsuits, a $1.5 million repair the latest in jail woes