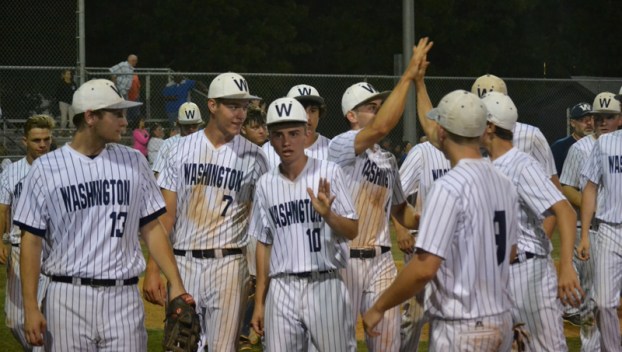 WASHINGTON — In a high intensity game with a packed venue, Washington was forced to battle back from a deficit again in the 2-A state playoffs. They came through to beat East Bladen, 5-4, Friday night at Washington High School.

The Pam Pack advanced to a two-out-of-three series against Randleman High School starting on Tuesday evening at 7 p.m. at Washington. Thursday they will play game two at Randleman, with an if-necessary game three slated for Saturday back at Washington.

Everette was back on the mound on Friday evening; the first start he’s made since the conference title-clinching win at West Craven. Everette gave the Pam Pack the winning edge agin Friday night.

“What worked the most was throwing outside, they really couldn’t touch the outside stuff,” Everette said. “We just have to do what we’ve been doing (heading into regionals). Come ready to play, hit the ball, throw strikes and make the plays.” 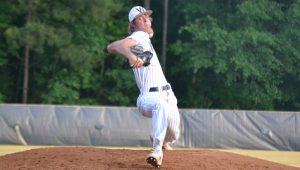 Despite surrendering a run in the first inning, the Pam Pack didn’t waste time answering it.

Wilson Peed and Mason Weaver led off the bottom of the first inning with back-to-back singles to create a first and third situation with no outs. Weaver stole second, and Everette’s groundout to the right side was enough to score Peed. Hunter Hall flew out to right field on the next at-bat to score Weaver on a sacrifice fly to take a 2-1 lead.

East Bladen bounced back in the top of the second, as they were able to push across two runs to re-take the lead.

In the bottom of the fourth, back-to-back walks were issued to Hall and Jeremiah Moore. Robert Pollock hit into a fielder’s choice to third and forced out Hall. Will Crisp and J.D. Swain singled to tie the game at three.

Everette shut down the Eagles in the fourth and fifth innings, and the Pam Pack took advantage of it by adding two more runs in the bottom of the fifth.

Weaver, Everette and Hall hit singles to begin the inning. Hall earned an RBI, but he was caught trying to steal second base during Moore’s at-bat. Moore and Crisp would reach on walks before Pollock hit a sacrifice fly, scoring Everette to extend the lead to 5-3.

A single, two groundouts and an error would score an Eagle base runner in the top of the sixth to trim their deficit to 5-4.

After a quiet bottom of the sixth inning, Everette went back on the mound in the seventh to attempt the complete game. He struck out the first two batters, but walked the third. Tyler Rowe would come into the game to earn the one-pitch save with a ground out to third base.

“It felt really good,” Rowe said about earning the save. “It’s a once in a lifetime experience (making it to regionals) and I wouldn’t have wanted to do it with any other group of baseball players.”

Pam Pack head coach Kevin Leggett was proud of his team’s fight, having to battle back once again.

“It was a lot of pressure in this one, we’ve been battling back the whole playoffs,” Leggett said. “When you’re playing tough and you don’t quit, things end up going your way. Sometimes you make your own luck by doing the little things right.”