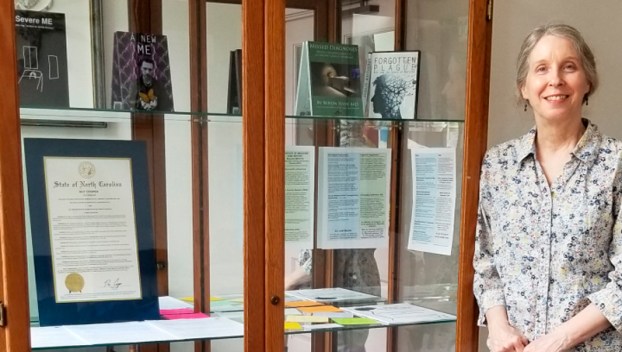 ON DISPLAY: In the entryway to Brown Library, a display dedicated to Myalgic Encephalomyelitis offers visitors a chance to learn about a sometimes-misunderstood condition. Colleen Steckel, pictured, lives with ME and has made it her mission to grow public awareness and provide support for those suffering from the disease.

For Colleen Steckel, energy is a precious commodity. She’s one of an estimated 1 million people in the United States who suffer from Myalgic Encephalomyelitis, an often misunderstood and sometimes misdiagnosed neuro-immune disease that can have devastating impacts on the body.

ME, for short, is a neuro-immune disease that impacts the body in multiple ways — persistent fatigue, heart problems, sleep dysfunction and a weakened immune system are some of the symptoms Steckel and others suffering from the disease face regularly.

This month marks ME Awareness Month, and Steckel is doing her part to raise awareness of, and dispel misconceptions surrounding, the disease.

Also this month, Gov. Roy Cooper signed a proclamation drafted by Steckel recognizing the challenges those suffering from ME, Chronic Lyme Disease, Fibromyalgia and Multiple Chemical Sensitivity face daily. Locally, a display in the foyer of Brown Library in Washington seeks to bring the public’s attention to the disease.

In many cases, Steckel says the condition is erroneously diagnosed by medical professionals as Chronic Fatigue Syndrome. While ME patients fit under that CFS diagnosis, the disease is more specific. Steckel argues that research is lacking and sometimes overshadowed by other conditions when it comes to grant funding, leaving ME patients to raise much of their own money for research.

“For years, ME was buried under the Chronic Fatigue Syndrome diagnosis,” Steckel said. “Most people have heard of Chronic Fatigue Syndrome and have a conception of what that disease is. ME is actually a neurological, immunological and cardiological disease — it affects my immune system, my heart and my brain. It also affects the energy production system.”

In some cases, the disease can leave patients homebound, which can lead to social isolation, financial hardship, an increased risk of mental illness, suicide and death. By raising awareness of the condition, Steckel hopes she can help change the narrative about the disease.

“As ME and CFS have different criteria, they are two different diseases. Too often in articles the term CFS is used as if it is synonymous with ME,” Steckel wrote in an email. “This inaccuracy leads to more confusion about the severity of the disease, which leaves patients unsupported by the wider community.”

Steckel says having her condition lumped in with CFS also creates challenges in seeking treatment and filing insurance claims.

For those grappling with the condition, Steckel also hosts a support group with roots in both North Carolina and Ohio. The North Carolina/Ohio ME & FM Support Group is open on Facebook and has been a source of community and support for more than 450 members.

“Our focus in advocacy and my support group is to get the word out,” Steckel said. “You don’t have to be ignored. You don’t have to be home sick with no treatment. There is knowledge out there. If we can overcome the stigma that we have and overcome the doctors not understanding it well enough to address it, we could have a huge impact in the lives of millions of people.”

By SABRINA BERNDT Washington Daily News   The sounds of traditional music will fill the halls of the Turnage Theatre... read more