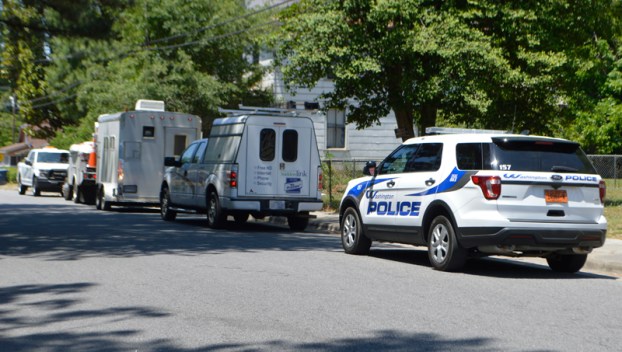 UNUSUAL CIRCUMSTANCES: Washington Police Department officers and Suddenlink personnel surveyed the scene where a bullet caused damage to a fiber internet line on East Seventh Street over the weekend, leading to an outage throughout Washington on Wednesday morning. (Matt Debnam/Daily News)

A internet outage that interrupted services in Washington on Wednesday morning was caused by a stray bullet on West Seventh Street, according to the Washington Police Department.

“What appears to have happened is on Saturday, Suddenlink got a notice of that problem on that line,” said Washington Police and Fire Services Director Stacy Drakeford. “On Sunday, they identified that line as being damaged, and it was shot.”

WPD officers investigating the incident on Wednesday discovered one bullet casing at the scene, but Drakeford said the WPD could not definitively say whether that was the round responsible for the damage.

“There were no calls for service as far as shots being fired in that neighborhood (over the weekend),” Drakeford said.

The fiber cable shot was suspended on a utility pole, and Drakeford says the WPD is classifying the incident as damage to property, unless other information comes to light.

While the outage had minimal impact on public safety operations for city departments, Drakeford says the WPD was unable to access criminal background information during the outage. At the Beaufort County 911 Communication Center, however, 911 services can be impacted by internet outages.

“911 operations are impacted by any interruption in Internet Service, but we can operate without it for a short period of time,” Beaufort County Sheriff’s Office Chief Deputy Charlie Rose said. “We may receive notice if there is a planned outage for maintenance. Our service has been slow today, but hasn’t been out completely.”

While Suddenlink representatives said the outage was classified as unplanned, requests for information about the extent and duration of the outage were not returned as of press time. The company issued the following statement on Wednesday evening:

“We are cooperating with the police on their investigation related to damage to our equipment that caused a service disruption for some Suddenlink customers in Washington. Our teams worked to repair the damage and service has been restored.”

By SABRINA BERNDT For the Washington Daily News Arts of the Pamlico is inviting all lovers of art, wine and... read more