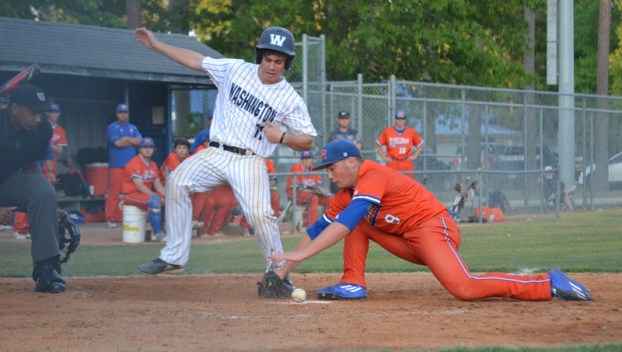 DODGED: Washington pinch runner Hayes Pippin has to circle around the plate to score on a wild pitch, after the throw to the pitcher covering the plate was missed. (Mitchell Thomas / Daily News)

WASHINGTON — The Pam Pack squandered an early lead on Tuesday night, despite Hunter Hall’s great performance on the mound. Washington falls in game one of the 2-A eastern regional best-of-three series, 4-2.

Randleman stranded 12 runners on base in the game, because Hall pitched his way out of multiple jams, including in the first inning.

In the first, Hall was looking at a runners on second and third with one out. He struck out the next two batters to end the inning.

In the bottom of the first, Mason Weaver drew a walk. A passed ball moved him to second, and Hall dribbled a ball off the end of his bat to the Tigers’ third baseman that forced him into a bad throw. The overthrow scored Weaver and gave Washington an early 1-0 lead.

Randleman got the run back by way of a wild pitch in the top of the second to tie the game. In the bottom of the frame, Robert Pollock was hit by a pitch, and pinch runner Hayes Pippin made his way around the bases and scored on a wild pitch to retake the lead.

Then, Hall found his groove. He struck out eight Randleman batters in the game, and kept the Tigers off the scoreboard until the fifth.

“Low strikes and outside strikes were really getting them,” Hall said. “They just started hitting it out of nowhere, and they ended up getting into it more than us.”

In the fourth, Washington had a chance to build its lead. With a runner on first, Pollock smoked a double to right field that would’ve easily scored the runner, but it hopped over the fence for a ground-rule double to stop him at third.  The Pam Pack wouldn’t cash in any runs in the frame. Pollock’s double was the only hit Washington managed in the game.

Randleman secured the lead in the top of the fifth inning. A hit-by-pitch on an two strike count came back to haunt the Pam Pack. A pinch runner for the catcher on first base was scored by a triple on the next at-bat to tie the game. With the infield playing in, the next batter hit a hard ground ball to Weaver, he threw it to the plate but it wasn’t quick enough to get the speedy Tiger base runner. Randleman took a 3-2 lead.

In the seventh, Randleman was able to get an insurance run with an RBI-single.

A lead off walk on four straight pitches to Wilson Peed got the crowd into it in Washington’s half of the seventh inning, but a fielder’s choice and a double play abruptly ended the game.

“Hunter threw great, Tyler (Rowe) came in and did a good job,” head coach Kevin Leggett said. “We did what we needed to do. They didn’t get many hits either, but one hit isn’t going to cut it in any game, against anybody.”

“(We have to) hit the ball,” Washington’s first baseman Jeremiah Moore said. “We’ll do that tomorrow in the cage; we’ll get the machine set up. We know we’re facing their ace (on Thursday), so we’ll be ready for him.”

The Pam Pack will travel to Randleman on Thursday for game two. If they win, they’ll return to Washington for game three on Saturday.

The softball season in the area has officially come to a close. The area softball teams all had something to... read more