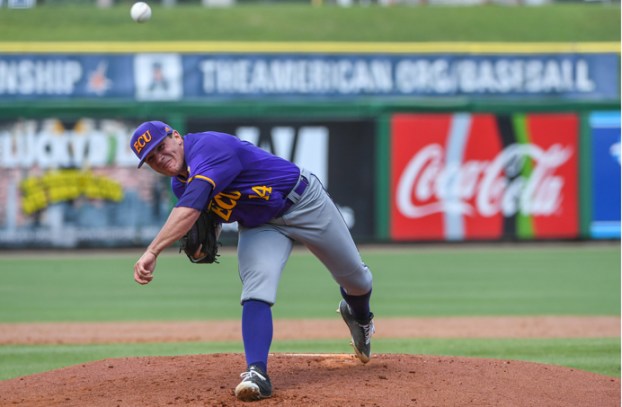 MOVING FORWARD: ECU’s Jake Agnos pitches seven innings with seven strikeouts as the Pirates avoid an early exit from the AAC tournament with a 13-2 win over Houston. (ECU ATHLETICS)

ECU (43-14) advances to a Friday afternoon contest against the loser between UConn and Wichita State, which will start at 3 p.m. (ET). Houston (32-24) was eliminated with its second loss of the tournament.

With the game tied at one-all, ECU got back-to-back jacks from Alec Burleson and Washer giving the Pirates a 4-1 lead in the top of the third inning. Bryant Packard extended his on-base streak to a personal-best 34 games when he was hit by a Clay Aguilar pitch with one away. After a flyout by Turner Brown to center, Burleson took a 2-2 offering from Aguilar to right field for his ninth homer of the season. Washer followed with the first of his two solo home runs with a shot to right-center.

Agnos (10-2) earned the win working seven strong innings where he allowed one run (earned) on four hits with four walks and seven strikeouts. The lefty became the first Pirate hurler with 10 wins in a season since Ryan Williams had 11 in 2014. Cam Colmore gave up a run (earned) on one-third of an inning on three hits with a walk before Zach Barnes closed the door with his 1.2 scoreless frames and a strikeout out of the bullpen.

ECU jumped out to an early 1-0 lead in the first inning thanks to Washer’s RBI single. Brown reached on an infield single coupled with a throwing error by Jared Trilio at third putting the senior on second base. Washer stepped up the plate singling up the middle for a one-run advantage.

Houston tied the game in the home half of the second on an Agnos wild pitch, which snapped his 32.2 scoreless inning streak. Brad Burkel walked to start the frame, took second on a sac bunt and third on a ground out before scampering home on Agnos spiked pitch.

The Pirates extended their lead in the sixth inning erupting for five runs to make it a 9-1 ball game. Connor Norby drew a bases loaded walk and Ryder Giles stroked a two-run double through the right. Norby came in to score on a wild pitch and Giles would touch home on the back end of a double play.

Washer’s second home run of the game, and third of the tournament, gave ECU a 10-1 lead in the seventh stanza.

Houston would score a run in the eighth and ECU would tack on three more in the ninth for a 13-2 Pirate victory.

Ten different Pirates registered a hit in the game with Thomas Francisco and Washer each tallying three base knocks. Giles added a pair of hits, while four players in Burleson (two), Giles (three), Washer (three) and Bryson Worrell (two). In all, the Pirates banged out 15 hits and improved to 27-2 on the year when registering double-digit hits.

Lael Lockhart and Triolo both had a pair of hits to lead the Cougars offensively.

BELHAVEN — The influx of talent in Beaufort County for softball is superb, and the Pungo Christian Academy softball team... read more