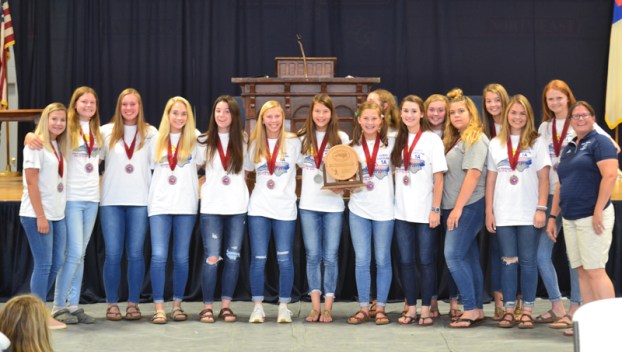 BELHAVEN — The influx of talent in Beaufort County for softball is superb, and the Pungo Christian Academy softball team can attest for that. They finished as Tarheel Independent Conference tournament champions and are the North Carolina Independent School Athletic Association state runner-ups after an incredible run in both of their post-season tournaments.

In the TIC championship, Pungo faced a Lawrence Academy team that hadn’t been beaten in the tournament in the previous five years. The Lady Raiders never trailed, going on to win, 11-1.

Melanie Rutledge — the seventh grade catcher and first baseman for the Lady Raiders — had a spectacular spring, and she capped it off by being awarded with All-tournament team honors, All-conference and All-State team after the tournaments concluded. Abbey Cutler, Emma Williams, and Reagan Stoop were also awarded with TIC All-tournament team honors. Rutledge went 1-for-3 in the championship game, but reached base three times and scored every time with an RBI-triple.

The Lady Raiders relied heavily on starting pitcher and eighth grader, Stoop. Rutledge and Stoop have been a pitching and catching tandem since they were eight years old. Stoop tossed a complete game in the TIC championship game, with four strikeouts and only allowed one run in the game. She also went 3-for-4 at the plate with three singles, which earned her MVP out of everyone at the TIC tournament. Stoop went on to be the every day pitcher for the Lady Raiders in the state tournament as well. She had an incredible showing, hurling 26 innings from the circle, and going 9-for-12 at the dish with six RBIs in four games. Stoop earned All-Conference and All-State team honors as well.

Pungo’s starting senior, Emily Spencer, went 2-for-4 with a couple of RBI-singles to propel her team to the TIC championship victory. Emily Spencer will go on to Beaufort County Community College and will pursue nursing after she graduates.

“I had a really fun season, I just wished we would’ve won the state championship,” Spencer said.

Riley Cutler, Emma Allen, as well as Parker and Emma Williams all added an RBI in the TIC championship game.

In the state playoffs, Pungo defeated Hobgood Academy, 11-0, to advance to a double elimination bracket. They suffered a 2-1 loss to Ridgecroft, but they bounced back later that afternoon by defeating Lawrence Academy again to draw a rematch with Ridgecroft. The Lady Raiders defeated the Rams this time, 12-2, to propel them into the NCISAA championship game.

“Beating Ridgecroft after they had beaten us the day before, we hit so much better and our fans were amazing,” head coach Leigh Stoops said. “We had people watching from home on Facebook and people cheering loudly for us there.”

They lost to Cape Fear Christian Academy, 9-6, in the state championship game, but that shouldn’t discourage the fantastic season the Lady Raiders had.

“It was a pretty exciting year. Was definitely a good way to go out,” the three sport athlete Allen said. “I haven’t played (softball) since I was eight, but I really loved it this year.” 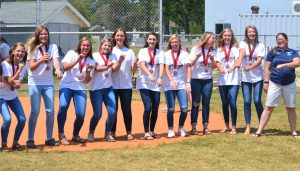 This Pungo team is extremely young, and they haven’t gone that far in the playoffs since the 1994-1995 season, but it wouldn’t be a surprise to see them back in the TIC and state championships again within the next few years.

“It’s so cool. Nobody has ever won (the TIC tournament) in all three sports,” Ashley Spencer said. “(My goal) for next year is to win all three again, and be state champions (in softball) instead of runner-ups.”

Pung got a lot of production from their younger players, but they will certainly miss their seniors next season — Bell Noble, Sidney Andrews, Emily Spencer, and Allen.