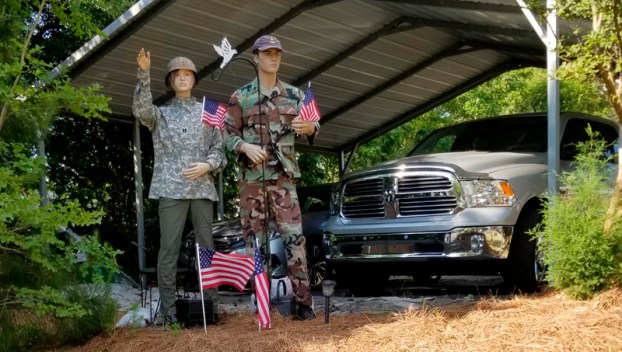 When D.W. Lane found a CPR training manikin at an East Carolina University sale, he jokingly told his wife that they should dress them up and place them in their yard. Now finding festive outfits and props for their three mannequins is a monthly job for him and his wife, Lorene Lane.

Since December 2018, the couple on East 15th Street has been dressing up mannequins for each holiday, including Memorial Day. Proudly displayed in their front yard, the mannequins have made the two neighborhood celebrities.

It began with a Mary and Joseph scene for Christmas, then the mannequins sported NASCAR gear for February, Easter bunny costumes for March and military uniforms for May. The two plan outfits and props months in advance.

The joke started with the purchase of the CPR manikin at ECU, but the mannequins quickly multiplied. A month after finding Susie, Jack and Jill made an appearance.

“When he first said something about wanting a mannequin I said, ‘What in the world?’” said Lorene Lane, laughing. “And now it’s just sort of grown into this. Now everybody wants to know, ‘Ok, what’s next?’”

According to the couple, the mannequins made people uncomfortable at first, but eventually it became an inside joke for the community. Their lawn makes a constant appearance on Facebook, and neighbors often call and visit to comment on their current setup.

“One man made a comment and said, ‘Your soldiers look so good I nearly want to stop and salute them,’” Lorene Lane said.

Along with the mannequins, Lorene Lane also recently bought a realistic baby doll, Georgiana, which she keeps tucked in with a baby blanket in a bassinet. Although mostly for show, the doll has had its own troublemaking moments. 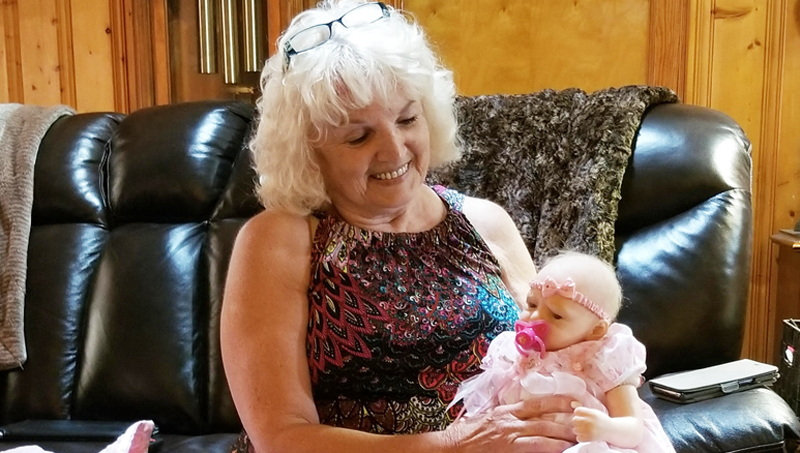 A LITTLE TOO REAL: Lorene Lane with her hyper-realistic baby doll, Georgiana. According to Lorene, her daughter-in-law will not look at Georgiana because it scares her too much. (Sabrina Berndt)

“We go to Bojangles with a group on Sunday afternoons, and we carried her,” Lorene Lane said. “One of the guys there carried her over to this couple that had a baby. He said, ‘Do you ever spank your baby like this?’ and started spanking her. Their eyes got real big until they realized she wasn’t real.”

According to D.W. and Lorene Lane, neighbors can expect a staged wedding for June, complete with a hand-built arch and flowers, and swimsuits for Fourth of July.

The newlywed couple celebrates their own first anniversary in June, and expect to be dressing up their mannequins for years to come.

She’s an interior designer. He’s an engineer. Add to the mix one of the few “painted ladies” of Washington’s downtown... read more