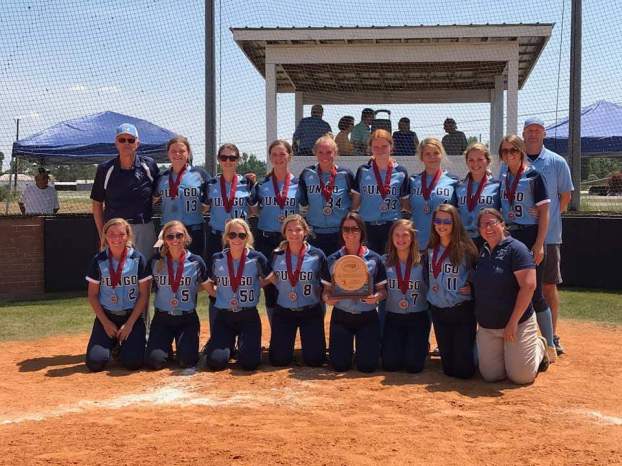 CELEBRATION: The Pungo softball team receives their runner-ups trophy at Cape Fear Christian Academy last weekend. The Lady Raiders advanced further than any team at PCA this year, and played in the state championship game for the first time since the 1994-95 season. (Leigh Stoops)

Headmistress of the school, Mrs. Marcy Morgan announced that Pungo would receive a banner for the school’s gym wall in the near future thanks to softball’s runner-up trophy.

After a tribute video of the softball team that included some highlights of their tournament, they awarded Cora Blaine Noble and Abbey Cutler with the first ever Tik-Tok award — A mobile app that is created to make short, humorous videos.

Thereafter, they brought up the baseball team. The Raiders had a 13-8 record under head coach Reggie Bishop, which included a trip to the Tarheel Independent Conference tournament championship. That would punch their ticket into the state playoffs, but they suffered a first round exit. The baseball team graduates Ben Simmons, Allen Mason, Jacob Alligood, and Chandler Cuthrell.

The girls basketball team at Pungo, finished with a 23-5 record under head coach Melanie Sawyer. The Lady Raiders finished second in the regular season TIC standings, but would defeat Ridgecroft in the TIC tournament to win the conference.

They would make it as far as the quarterfinals in the state playoffs. With only eight players on this year’s team, three-sport athletes Emily Spencer and Emma Allen both graduate this year.

The Pungo Volleyball team also came away with a TIC tournament championship, which is the first time in school history that they have won all three sports in the same season.

“It is very encouraging, we have great students, great coaches, and people that work hard,” Morgan said. “Athletically, we’ve had a really strong year. We hosted all the TIC tournaments here this year, so it has been a busy year.”

There are quite a few players that play all three sports and won the TIC tournament in volleyball, basketball and softball, that are confident they can do the same thing next year.

“I want to keep winning everything,” sophomore Riley Cutler said. “I want to win a state championship. I know we can do it. The whole experience the last week was really cool.”

Head softball coach Leigh Stoops talked about how much her players enjoyed themselves in the tournaments and how hard her team played.

“All the girls, regardless if they were a starter or a substitute everybody was in (the game),” Stoops said. “The heat index was 110 degrees, but they persevered. It showed how much they wanted it.”

The assembly was followed up with fun games outside of the school on the baseball field, and they ended the school day with a prayer for the graduating seniors.

A lot of young talent fills the rosters of the Pungo Christian Academy sports teams, so it won’t be a surprise to see them back in the thick of the state playoffs in any sport next season.