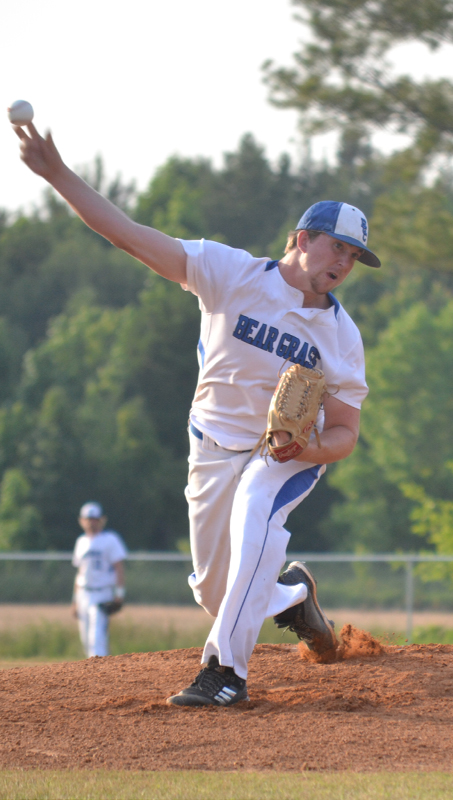 BEAR GRASS — Bear Grass forced a game three in the eastern regional baseball finals with a walk-off from Joseph Perry on Friday night, but fell to Rosewood in game three on Saturday evening, 8-4.

The Bear Grass Bears finished with a 24-5 record and were amongst the top four teams in the state at the 1-A level.

In game one, Rosewood’s Tanner McKeel threw a complete, 7-inning game on their way to a 2-1 victory. McKeel only allowed four hits and one run in the contest.

Bear Grass’ Jordan Leggett pitched the first three innings of the game, only to be replaced in the fourth inning to save his arm for Friday’s game.

In Game two at Bear Grass, Leggett hurled a complete game, and his offense gave him a three run cushion to work with in the bottom half of the first.

“I started off a little shaky but I dug deep,” Leggett said. “I came in with the curveball and it started working good. The defense did really good and the bats did their thing when we needed it.”

Donald Stotesbury led off the inning with a single up the middle. Perry had a perfectly placed bunt down the third base line that was picked up and thrown errantly to first base and moved the runners up a base as the ball went out of play.

Junior third baseman Luke Taylor then laced a 2-RBI double down the left field-line to take the early lead. Logan Hale would hit a sacrifice fly to increase the lead to 3-0. 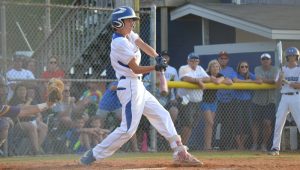 SQUARED UP: Bear Grass’ Tanner Lyle squares up on a pitch in the first inning of the game two victory over Rosewood. (Mitchell Thomas / Daily News)

In the third, Rosewood got a couple of runs back to increase the tension in the stadium. Every high-intensity pitch drew a reaction from either side of the field, as supporters surrounded its entirety.

The Eagles tied it in the sixth, only for Bear Grass to win it in the seventh as Stotesbury hit a 2-out double to put runners on second and third. Perry hit the walk-off single in the next at-bat to force Saturday’s game three.

“That was a great feeling,” Perry said about the walk-off. “We swung at a lot of balls tonight and it hurt us. We popped up too much. We have to put it on the ground and make no mistakes.”

Head coach Terry Perry was happy his son hit the walk-off, but explained that the whole team feels like his sons.

“They’re all mine, man,” Perry said. “I treat them all the same. I’m tough on them, I’m their biggest cheerleader, I hug them and tell them I love them. I treat them like I always have.” 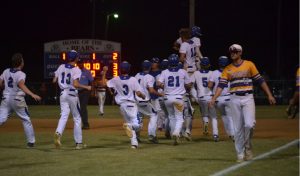 WALK-OFF: Following Joseph Perry’s single up the middle, he was met by his teammates at first base after the winning run scored for Bear Grass in a 4-3 victory over Rosewood.

Juniors and rising seniors Trey Lanier, Jordan Futrell, Ty Johnson, and Taylor will try and lead the team to a deep playoff run again next season. 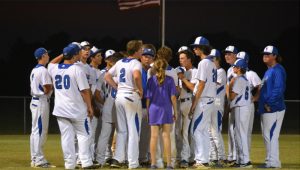 PEP-TALK: Head coach of the Bears Terry Perry talks with his team after the walk-off win over Rosewood. (Mitchell Thomas / Daily News)