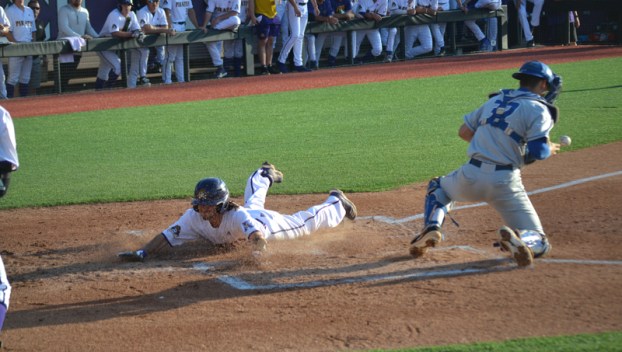 DIRTY PLATE: ECU's Brandon Lloyd slides safely into home to score a run against Memphis earlier this season. The Pirates slide into the No. 10 seed for the NCAA regional as a host this weekend. (Mitchell Thomas / Daily News)

GREENVILLE — Purple and gold filed into a watch party at Sup Dogs in Greenville on Monday afternoon, as the East Carolina University Pirates learned they would host a NCAA regional next weekend and found out their opponents on ESPNU’s selection show.

ECU was named the No. 10 overall seed in the tournament. They will host Quinnipiac University out of Hamden, Connecticut in the first game of the regional, while Campbell University and North Carolina State will be in town as well.

This is the second consecutive season in which ECU has hosted a regional, and only the third time in school history they have done so.

In 2009, the Pirates won the Greenville regional. They defeated Binghamton University 11-7, before losing to South Carolina the following day 12-2. The Pirates bounced back to win another game over Binghamton, and were forced to defeat South Carolina twice to advance, which they did.

ECU would go on to Chapel Hill for the super regional and were defeated by the Tar Heels in both games they played.

Similarly, in last year’s Greenville regional, the Pirates won game one over UNC-Wilmington, 16-7. Again, it was South Carolina that put ECU in the loser’s bracket with a 4-2 defeat, and the Pirates would be eliminated by UNCW in game five of the regional, 9-7.

In the 2019 regional, the Pirates have their work cut out. N.C. State boasts a 42-17 record, and coming off an ACC tournament loss in the semi-finals to Georgia Tech.

The Campbell Camels are relatively hot right now. With a 35-19 record, Campbell chalked up wins over East Carolina and Duke in the regular season, and they also won the Big South tournament this past weekend.

Quinnipiac University is also a tournament winner. They won the MAAC tournament with a 13-inning victory over Fairfield in the championship. The Bobcats sit at 29-27 for the season, with their biggest win coming at Wake Forest in February.

The Pirates are looking for their first national championship since the 1961 season when East Carolina College was still at the NAIA level. They entered the tournament with an 18-3 record. At the time, the school was having trouble raising money to make it to Sioux City, Iowa for the tournament. The “Bucs” as they were called then, only took 13 players and had to leave four teammates behind in Greenville. With only nine position players and four pitchers, East Carolina came away with the national title.

Following the Campbell-N.C. State game at Noon, ECU’s game one matchup against Quinnipiac is set for 6 p.m.