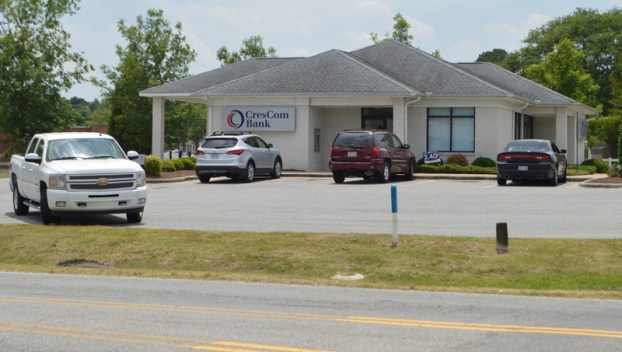 CHOCOWINITY — The Chocowinity Police Department and federal law enforcement agencies are investigating a bank robbery at the Chocowinity branch of CresCom Bank that happened Tuesday morning.

According to a press release from the CPD, a male subject entered the bank at around 10:15 a.m. Tuesday and demanded money from the teller on duty. The suspect was dressed in a white Tyvex paint suit, a white mask and sunglasses.

After taking an undisclosed amount of money from the bank, the subject left the scene in what the CPD describes as a newer-model silver Nissan Versa. The subject was last seen headed south on Bragaw Lane toward the U.S. Highway 17 Bypass.

Chocowinity Police Chief Ralph Whitehurst confirmed that the Federal Bureau of Investigation sent field agents to Chocowinity on Tuesday to assist in the investigation. The Beaufort County Sheriff’s Office is providing assistance in the case as well.

A sign posted on the bank’s drive-through window Tuesday afternoon read, “This office has been temporarily closed due to an emergency. One of our other locations will be happy to assist you.”

The North Carolina Bankers Association is offering a reward through its Robbery Reward Program for information leading to the arrest and indictment of any individuals who were involved.

Anyone with information concerning the robbery should contact the Chocowinity Police Department at 252-946-2882.

Traffic is flowing again on the U.S. Highway 17 North Bypass onramp at the intersection with N.C. Highway 33 after... read more