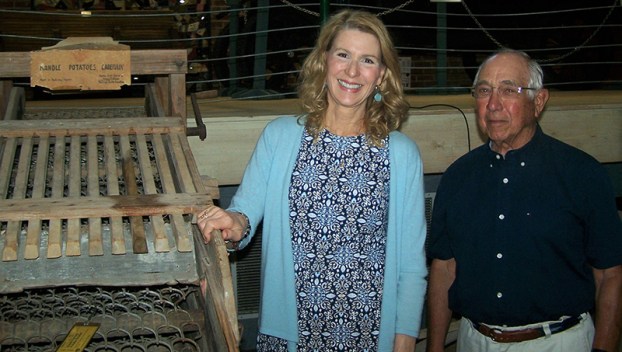 Kristin Cooper, First Lady of North Carolina, was in Columbia on May 25 to celebrate the 26th anniversary of the Partnership for the Sounds. While in the Columbia Theater Joe Landino, a Tyrrell resident for 58 years (right), explained the functions of the hand-cranked Irish potato grader, which was built in his hometown of Atlanta, New York, and donated by Al Hollis. (R. McClees photo)

Kristin Cooper, First Lady of North Carolina, and Natalie Cooper, middle daughter of the state’s First Couple, visited the Columbia Theater and Pocosin Arts, and took a short cruise on the Scuppernong River on May 25.

The First Lady was special guest of the Partnership for the Sounds, which celebrated its 26th anniversary with events in Tyrrell, Hyde and Beaufort counties.

The women arrived at the theater at 11 a.m., escorted by four State Highway Patrol and SBI agents. They met and talked with about 40 people after official greetings were extended by Tyrrell commissioners chairman Tommy Everett and Columbia mayor James Cahoon. David Clegg, Tyrrell manager-attorney, and also chairman of the Partnership’s governing board, presided.

Among Columbia Theater’s broad collection of Tyrrell history the First Lady found a potato grader, crab pot, and 17-foot pound net boat interesting artifacts, all of which were unfamiliar to the Oklahoma native.

Cooper said she intends to visit all 100 North Carolina counties, and Tyrrell was No. 69. (She went to Hyde and Beaufort later in the day).

Then Walter Davenport conducted a brief cruise on the Scuppernong River in the Partnership for the Sounds’ river-roaming pontoon boat.

Cooper’s official duties ended at 9 p.m. at the Estuarium in Washington, after which she and her entourage returned to Raleigh by automobile.

With multiple measles outbreaks occurring in the United States, the North Carolina Department of Health and Human Services is encouraging... read more