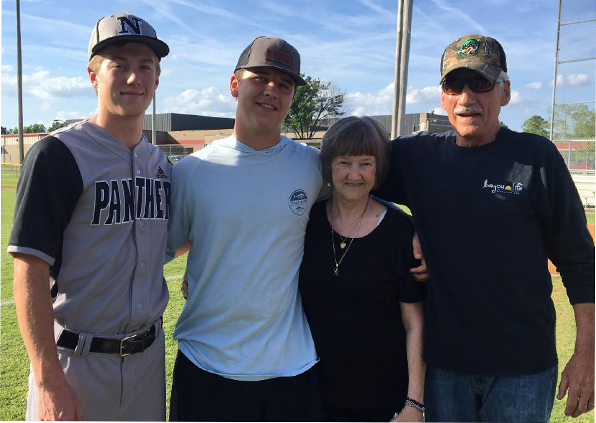 PINETOWN — Each year on Senior Night at Northside High School, the Bryan Keith Woolard Memorial scholarship is awarded to one senior on the Panthers’ baseball team. This year, senior outfielder Austin Newman was awarded with the scholarship.

Woolard is a former Northside High School baseball standout, who died in a tragic automobile accident in 2009. He was named the team’s Defensive Player of the Year and Most Valuable Player in his time as a Panther.

Since then, the scholarship was created to award a deserving senior with a $500 to go toward his first year of college.

Newman is the 10th player to benefit from the award. Unfortunately, Newman suffered an ACL injury last year that kept him sidelined from participating in the 2018-2019 Panthers’ baseball season. Newman also played basketball for the Panthers.

However, the senior plans to make the short trip down U.S. Highway 264 to Greenville and attend East Carolina University next school year.

Head baseball coach Keith Boyd was very happy for Newman’s family and his future, despite the injury that kept him off the court and field this year.

“Austin is a hard working kid, always has been, and I’ve been coaching him since he was 9-years old,” Boyd said. “Unfortunate for him that he had the knee injury at the end of last season that caused him to miss his senior year. Maybe the scholarship will ease the pain of missing all season. He was able to end up on a high note of what was a disappointing year in not being able to play. I am happy for him and his family.”

Newman was playing Junior Varsity for the first two seasons, and he played rather well. He had a combined .245 batting average, and played four games into his junior season before sustaining a knee injury that kept him out for the remainder of the season, plus his senior year.

Newman was one of two seniors on the Panthers’ baseball team this year. Dawson Boyd will also attend college next year at North Carolina State University to take up agriculture.

“This scholarship is special to me with the connection to baseball and knowing how much it means to Bryan’s family,” Newman said. “It will be a huge help to me, and I am thankful and very honored to have been chosen for the scholarship.”

WASHINGTON — The Washington Pam Pack track team has been making noise for quite a while, and they capped off... read more