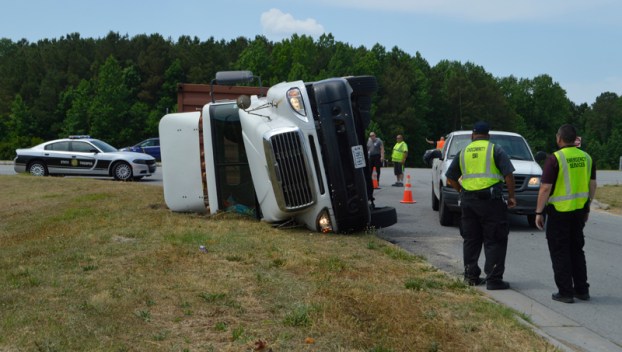 ROLLOVER: The driver of the tractor trailer was checked out by Chocowinity and Beaufort County EMS and did not suffer any serious injuries. (Matt Debnam/Daily News)

Traffic is flowing again on the U.S. Highway 17 North Bypass onramp at the intersection with N.C. Highway 33 after a tractor trailer rollover closed the onramp Tuesday morning.

According to Brian Lanning, with the Chocowinity Fire Department, the vehicle was traveling east on N.C. Highway 33 and was taking a right turn onto the onramp when it rolled over. Lanning said that the driver of the vehicle appeared to be in good condition and was being checked out by Chocowinity and Beaufort County EMS.

The truck was carrying bales of cotton, and a small oil spill from the wreck was quickly contained. Aside from the oil spill, the wreck presented no dangers to public safety or the environment. The N.C. State Highway Patrol is investigating cause of  the accident.

Early fish kills may have roots in Florence flooding

Slime mold is making an early appearance this year, as are the dead fish that fall prey to the infection.... read more