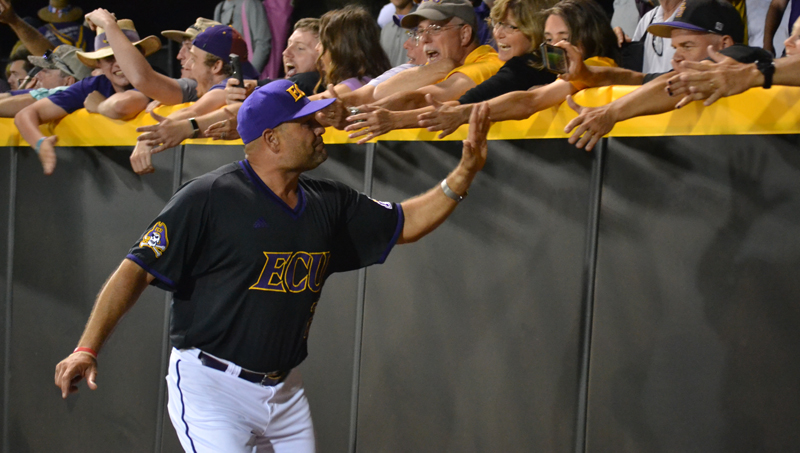 In a very short time of being around the team, the fans, and Clark-LeClair Stadium, it is evident that East Carolina University baseball’s atmosphere is amongst the best in the entire nation.

ECU is consistently in the top 25 in the country with average attendance and total attendance for a season. They have topped the American Athletic Conference every year since the merge in those categories. The NCAA even listed it as one of “The 13 best places to watch college baseball, according to the fans.”

The Pirates have outfield grass seating called “The Jungle.” Hundreds, even thousands of people set up their foldable chairs and tailgate gear behind the outfield wall to enjoy the game. They pretty much get to tailgate through the game’s entirety. Sure, the fans may heckle the outfielders of opposing teams a bit, but that’s a part of the great game of baseball. However, even in the midst of battle, the ECU fan base still let it’s southern hospitality shine through.

In this past weekend’s Greenville regional, the Pirates lost to Quinnipiac in the opening game. The Pirates would get revenge on Sunday over the Bobcats, but “The Jungle” attendees didn’t let them go home empty-handed. A care package or a “dugout-delight” filled with Oreos, chips, along with other snacks and goodies were presented to Bobcats’ pitcher Colin Donnelly after the eighth inning of the Pirates’ victory.

Donnelly was recognized after a photo was tweeted out of him with the caption, “I AM THE JUNGLE.” Of course, the ECU fan base had its fun with Donnelly, whom played in a summer baseball league with ECU pitcher Jake Kuchmaner. However, upon being called by the fans to the outfield in the eighth inning, Donnelly expressed his appreciation to ECU fans by saying, “Thank you guys for making my last series memorable.”

Whether its the batters in the on-deck circle, the outfielders or the first and third basemen closest to the crowd, light-hearted heckling is likely to occur, but they all usually crack a smile.

Even head baseball coach Cliff Godwin gets choked up when he talks about the passion ECU fans have for their baseball team.

“There might not be as many people at our games as other places, but it seemed like there was 10-to-15,000 people out there tonight. It was awesome,” Godwin said following the Super Regional clinching victory.

Fans bring their megaphones to the outfield for their chants that ring through the rest of the stadium for everyone else to repeat. Whether it’s clapping together during a song, the outfield screaming “purple” and everyone else answering back with “gold,” it is truly an experience stepping out to the Pirates’ ballpark. If you’re lucky enough to experience a win, you might just get a player or two to “Jungle Jump” or “LeClair Leap” over the outfield wall to hang with the fans that bring the energy during every game. It’s disappointing the Pirates won’t be hosting a Super Regional, so the crave for another taste of one of the best atmosphere’s in college baseball will have to wait until next February.

Thoughts on the big game

A crazy tournament gets even stranger, Adams leads area coaches

My favorite rite of spring, Joe Dooley and a running doubleheader