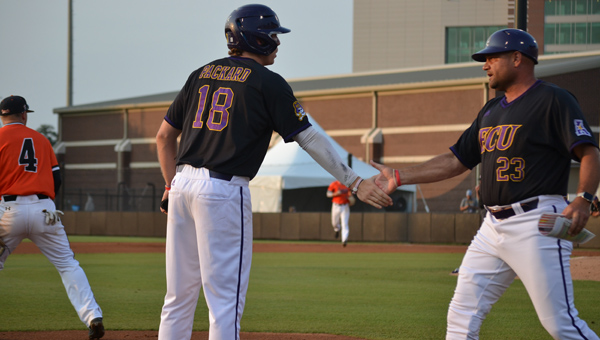 The East Carolina baseball team this past season had the most draft picks in a season since 2004 with seven draftees. Five of the seven decided to forgo the remainder of their college eligibility to pursue their MLB careers, while the other two graduated— Bryant Packard, Spencer Brickhouse, Jake Agnos, Jake Washer, Trey Benton, Evan Voliva and Turner Brown.

Packard was drafted in the fifth round with the 142nd pick in the MLB draft and was taken by the Detroit Tigers. The left fielder was placed on the short-season single-A Connecticut Tigers. Most draftees are sent to short-season rookie ball destinations. Currently, Packard owns the highest on-base percentage on the team (.529). He has five hits in 13 at-bats while drawing four walks. 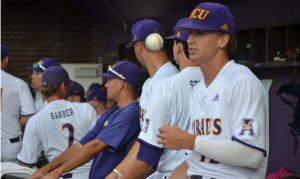 TAKE FLIGHT: Freshman pitcher Christian Jayne plays catch with himself prior to a regional game in Greenville this past year. (Mitchell Thomas / Daily News)

With the 212nd pick in the seventh round of the 2019 MLB draft, the Arizona Diamondbacks picked up Brickhouse. Now a member of the single-A rookie ball Missoula Osprey, Brickhouse has made an impact already in Montana. The power-hitting lefty is 10-for-30 (.333) at the plate, with seven RBIs and has drawn five walks.

The New York Yankees selected Jake Agnos, the American Athletic Conference Pitcher of the Year in the fourth round with the 135th-overall pick. Agnos recently made his first start for the Gulf Coast League Yankees West in Florida. He only got through two innings before being taken out. All six outs he recorded were from strikeouts, but he surrendered four runs (two earned) on two hits and gave up a walk. His current ERA sits at 9.00 and is now 0-1 on the season. However, the GCL Yankees West rookie ball team has only played three games so far this season.

A familiar face accompanies Agnos on the GSL Yankees West team in Evan Voliva. Voliva has one appearance on the season, giving up one unearned run in 2.0 innings of relief work.

Benton, a 15th-round pick by the Cleveland Indians, probably won’t get a look on the mound until next season. Benton had Tommy John surgery performed on May 21, which likely affected his draft stock.

Brown was picked up by the Colorado Rockies in the 19th round. The second-team All-AAC honoree compiled a .300 batting average with 33 RBIs and 39 runs in his senior season. However, he’s been held hitless so far in his time with the Grand Junction Rockies. He has gone 0-for-8 with a walk and a run scored.

Most short-season, single-A rookie ball clubs’ seasons are just getting underway. There’s plenty of time for former Pirates to earn more playing time and work their way up to the Major Leagues.

CHOCOWINITY — After serving on staff as an assistant in track, football and basketball, Davelle Whitney has been named the head... read more