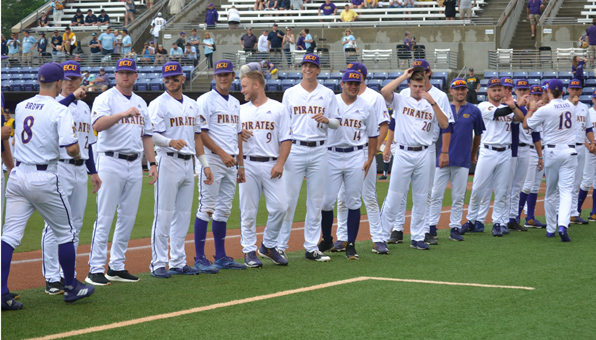 SUMMER BALL: The East Carolina University Pirates lined up for the national anthem prior to the opening game of the Greenville regional this past year. ECU had multiple players selected to various summer leagues this year. (Mitchell Thomas / Daily News)

After a historic run in the 2019 East Carolina University baseball season, winning 47 games, the regular season conference title, and advancing into the super regionals, the Pirates sent seven players to the MLB draft and nine players around the country for summer baseball leagues.

Junior outfielder Dusty Baker joined the Morehead City Marlins this summer, and as of June 25, he’s batting .531 (17-for-32) with a couple of home runs and seven RBIs through 11 games.

ECU’s Alec Burleson has had an underwhelming start to 2019’s summer ball season after some eye-popping numbers in the summer of 2018. So far, he’s batting .148 (4-for-27) through eight games with a couple of doubles and four RBIs. He’s also pitched in one game for 2.0 innings of work without allowing a run.

Sophomore catcher Seth Caddell is expected to take over behind the plate for the Pirates next year with the departure of Jake Washer. Caddell has batted .174 (4-for-23) so far this summer for the Keene Swamp Bats in New Hampshire. He has two home runs and four RBIs.

Rising sophomore infielder Thomas Francisco has made the most of his summer, batting .447 with a couple of doubles and seven RBIs through 9 games with the Charlottesville Tom Sox in Virginia.

Christian Jayne and Carter Spivey joined together with the Bethesda Big Train in Maryland this summer. Jayne is batting .303 (23-for-76) through 19 games this summer season. He’s tallied two doubles, a triple, a home run and 13 RBIs.

Spivey, the freshman right-hander, has pitched in four games and put in 4.0 innings of work. He’s given up 5 runs on nine hits with three strikeouts. He’s posted an 11.25 ERA so far this season.

Rising juniors Connor Norby and Bryson Worrell are also teammates in the 2019 summer season for the Waynesboro Generals in Virginia. Norby is batting .333 (12-for-36) with four RBIs thus far. Worrell has accumulated a .283 (15-for-53) average with a double, triple and three homeruns with 10 RBIs through 14 games.

The Asheboro Copperheads of North Carolina picked up Garrett Saylor this summer. So far, he’s posted a 2-1 record with two starts in 16.1 innings pitched. He has 11 strikeouts and a 6.06 ERA.

Most summer league teams play into the month of August before beginning the playoffs in their respective leagues. All leagues will have wrapped up before schools are back in session for the fall semester.