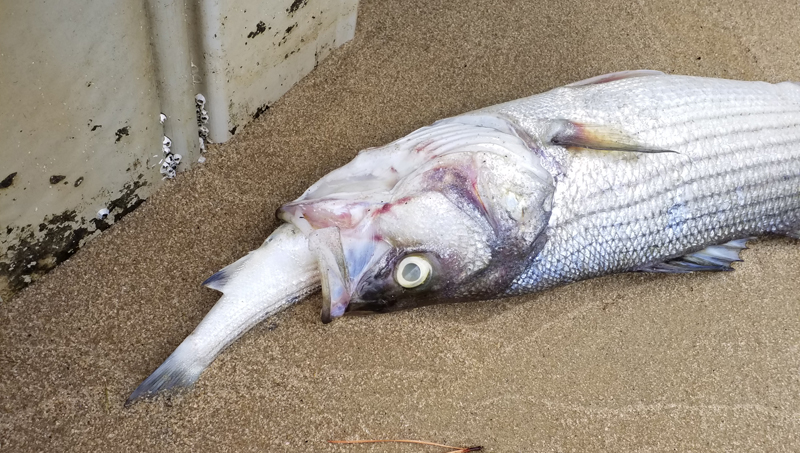 MORTALITY EVENT: Residents of the Core Point area, on the south side of the Pamlico River, woke up to thousands of dead fish along the beach Wednesday. Nearly a dozen species of fish were impacted. (Jill Paxson/N.C. Department of Environmental Quality)

A fish kill left throngs of dead fish along a stretch of beach at Core Point on Wednesday. According to the N.C. Department of Environmental Quality, the mass mortality event killed about 3,800 fish of a wide variety of species, ranging from juveniles to adults.

DEQ Senior Specialist Jill Paxson says storms on Tuesday may have contributed to the kill, with winds blowing from the south forcing oxygen-poor water from the bottom of the river. Add temperature shock and salinity changes from the storm moving in, and conditions were right for a fish kill.

“With really strong winds, if it’s blowing from the south, it’s going to blow the surface water across to the north and is going to upwell bottom waters along the south shoreline,” Paxson said. “… What we’re seeing, most likely, is a lack of oxygen.”

“This is one of two to three events of my 15 years working here that it’s been like this with really, really diverse species from a small size to adult size,” Paxson said. “… We’re used to seeing similar size classes go together, like all menhaden. It’s typically really close to the same size, like juveniles. This is definitely one of the more interesting fish kills I’ve been on.”

While oxygen and salinity levels were mostly back to normal at Core Point when the DEQ responded to the kill, Paxson recommends people in the area avoid unnecessary contact with the water until nature takes care of the cleanup.

“Anytime you see something out of the ordinary, which includes dead fish, foam on the water or cloudy water, that can indicate an algae bloom,” Paxson said. “You should give it time for things to dissipate. It doesn’t take long for seagulls and vultures to take care of that fish. But usually during decomposition, there’s a higher instance of running into bacteria and fungus. So, let them do their work.”

So far this year, there has been only one other fish kill in Beaufort County. That incident, reported in mid-May, killed about 370 fish on Wright’s Creek, near the mouth of the Pungo River.

“It’s been relatively quiet, which has been surprising,” said Sound Rivers Executive Director Heather Deck. “It may be due to the fact that we’ve been pretty dry, but it has been hot. This is the first one I’ve heard about in a while now.”

To report a fish kill on the Tar, Pamlico or Pungo rivers, or their tributaries, call the Washington Regional Office of DEQ at 252-946-6481.