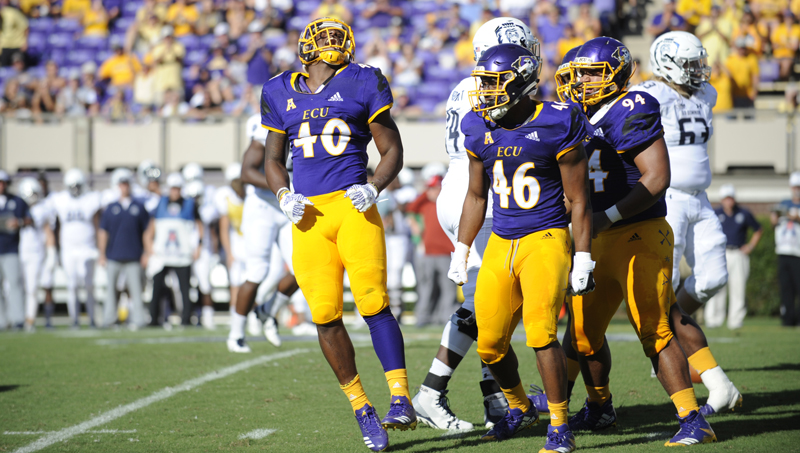 It’s over. The wait for football season has become obsolete. This month, football begins in several levels of the sport. The East Carolina University Pirates are a team full of new faces, including new head coach Mike Houston. Looking to make a difference in his first season with the Pirates, Houston has already proved that he can recruit at a high-level. I expect his recruiting skills to translate to the playing field, and it might be just enough to push the Pirates into bowl season. However, the Pirates must win seven games this season due to having division-II opponent, William & Mary on the schedule.

Despite what Mike Houston has done in the off-season with his first recruiting class and the development of current players, it doesn’t seem likely the Pirates will be putting together a full game in Houston’s debut. N.C. State lost quite a bit of offensive production last season including starting quarterback Ryan Finley. However, the Pirates and quarterback Holton Ahlers will keep it within striking distance and give themselves a chance to win.

Gardner-Webb struggled mightily last year, only scraping up three wins in a relatively watered down BIG SOUTH conference. The point differential in losses last season was a startling 33.4 points per game. This has the recipe for a blowout victory and a receptive crowd for Mike Houston’s home opener.

This one could be tough for the Pirates. The midshipmen had an abysmal 3-9 season last year, but it was only the second losing season in 11 years under head coach Ken Niumatalolo, who overhauled the staff in the offseason with the fires of three defensive assistants. Also, both of Navy’s quarterbacks last year graduated, so unless Navy trots out the next Keenan Reynolds, ECU notches their first AAC victory in a close one.

Last year the tribe had their third consecutive losing season going 4-6. Former Virginia and Richmond head coach Mike London has compiled a 62-61 overall record at his last three coaching stops and will give the Pirates fits for three quarters in a battle of first-year head coaches.

ECU and ODU played in a classic last year that ended with a last-second field goal from Pirate’s place-kicker Jake Verity to win it, 37-35 in Greenville. This year, two similar teams will hash it out, but this time in Norfolk, Virginia. The Monarchs lost quite a bit after last season in QB Blake LaRussa, two wide receivers and NFL defensive end prospect, Oshane Ximines. With that said, I think the Pirates squeak out another win here.

The Pirates got it handed to them in Philadelphia last year, 49-6. The Owls did lose starting running back Ryquell Armstead and leading receiver Ventell Bryant, but wide receiver Isaiah Wright, who had a punt return for a touchdown against the Pirates last season is still there. Temple is just simply more talented than the Pirates as of right now.

The self-proclaimed 2017 National Champions have a few questions surrounding them as starting quarterback McKenzie Milton was seriously injured late last season and his health for 2019 is still in limbo, but Notre Dame transfer Brandon Wimbush will look to fill in for Milton. The Knights won in Greenville last season, 37-10. I see a similar score for this season’s matchup.

This is truly the turning point for the Pirate’s season. If they lose, it might be difficult to land a bowl bid. Despite the Bulls winning 20-13 last year, they lost their last six games to finish 7-6 including the bowl game. However, head coach Charlie Strong added a new offensive coordinator that averaged 52 points a game at Valdosta State, and former Florida Gator’s running back Jordan Cronkite transferred to USF and made an immediate impact for the Bulls last season.

Last year’s match-up wasn’t even close, the Pirates fell 56-6 and weren’t very competitive. Bearcat’s quarterback Desmond Ridder won the job in the middle of the season last year and hasn’t given it up, he will head into this season as the sure starter. The Bearcats were ranked as high as No. 24 in the AP poll last season, and may open up with a similar ranking.

ECU has won the last four out of seven meetings between the two squads, but head coach Sonny Dykes looks to take the Mustangs bowling this year after losing the final two games of the season last year to finish 5-7. SMU’s top passer in the school’s history, Ben Hicks, chose to transfer to Arkansas with former head coach Chad Morris. This opens the door for the Pirates to steal one away from Dallas, Texas.

ECU handled the Huskies last year in Greenville by a score of 55-21. The University of Connecticut is exiting the AAC conference following the season, likely because they have not been very competitive. This game comes at a perfect time for the Pirates, and it will push them over the edge for a bowl berth.

Tulsa may have finished 3-9 last season, but they had to play some not-so-favorable out of conference games against Texas and Arkansas. Tulsa is returning a majority of their playmakers, including the double-edged sword of Shamari Brooks and Corey Taylor in the backfield. They combined for nearly 1,800 yards last season and 18 touchdowns.

The Pirates’ six wins would not qualify them for post-season play as a win over William & Mary would not count in the eyes of the NCAA, making their “official record,” 5-6. However, in the event that not enough teams qualified for post-season play, it will be up to ECU’s Academic Progress Rate to see if they receive any bowl invitations. A step in the right direction for Houston and his squad for the 2019 season, will portray a glimmer of hope for the future.