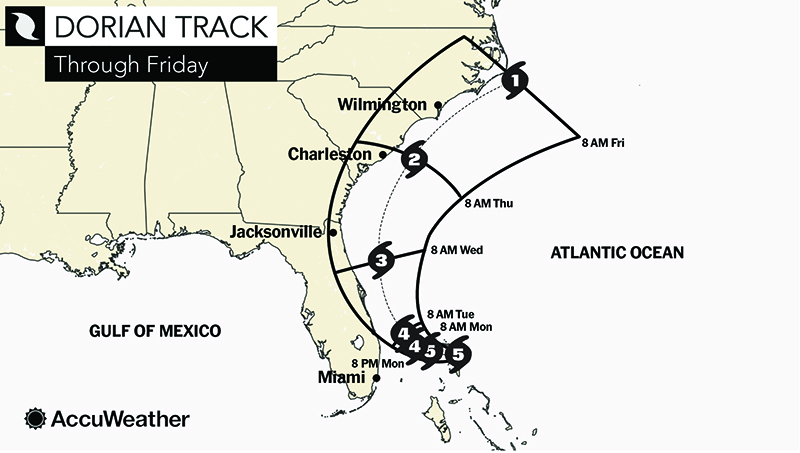 At 11:02 a.m., the National Weather Service issues a Hurricane Watch for Beaufort County.

– POTENTIAL THREAT TO LIFE AND PROPERTY: Potential for wind 58 to 73 mph

– PREPARE: Efforts to protect life and property should now be underway. Prepare for significant wind damage.

– Some roads impassable from large debris, and more within urban or heavily wooded places. A few bridges, causeways, and access routes impassable.

– POTENTIAL THREAT TO LIFE AND PROPERTY: Little to no storm surge flooding

– PLAN: There is little to no threat of storm surge flooding. Rough surf, coastal erosion, and life-threatening rip currents are possible.

– PREPARE: Little to no preparations for storm surge flooding are needed.

– POTENTIAL IMPACTS: Little to none

– Little to no potential impacts from storm surge flooding.

– PLAN: Emergency plans should include the potential for major flooding from heavy rain. Evacuations and rescues are likely.

– PREPARE: Strongly consider protective actions, especially if you are in an area vulnerable to flooding.

– ACT: Heed any flood watches and warnings. Failure to take action will likely result in serious injury or loss of life.

– Major rainfall flooding may prompt many evacuations and rescues.

– Flood waters can enter many structures within multiple communities, some structures becoming uninhabitable or washed away. Many places where flood waters may cover escape routes. Streets and parking lots become rivers of moving water with underpasses submerged. Driving conditions become dangerous. Many road and bridge closures with some weakened or washed out.

– Situation is unfavorable for tornadoes

– POTENTIAL THREAT TO LIFE AND PROPERTY: Tornadoes not expected

– PLAN: Tornadoes are not expected. Showers and thunderstorms with gusty winds may still occur.

– PREPARE: Little to no preparations needed to protect against tornadoes at this time. Keep informed of the latest tornado situation.

– ACT: Listen for changes in the forecast.

– POTENTIAL IMPACTS: Little to None

– Little to no potential impacts from tornadoes.