Dorian to arrive Thursday with wind, rain and surge 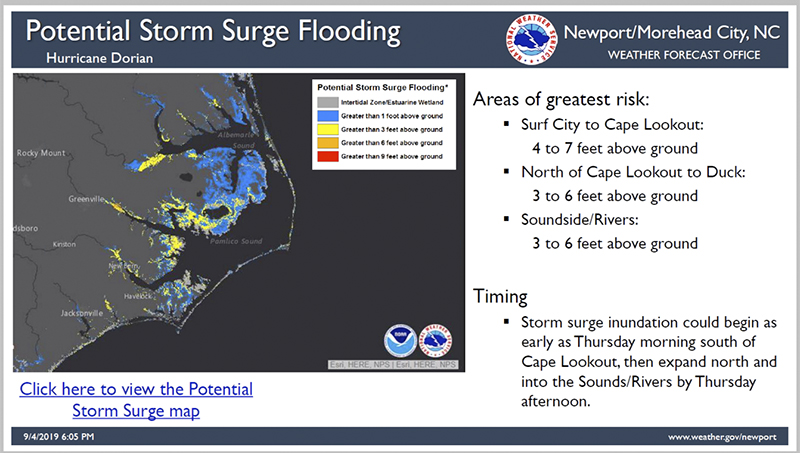 Torrential rainfall, hurricane-force winds, storm surge and the potential for a tornado are Hurricane Dorian’s expected impacts across Beaufort County.

“Our language has changed from ‘possible’ to ‘likely’ to ‘expected,’” said David Glenn, meteorologist-in-charge for the National Weather Service Newport/Morehead City office, during a webinar Wednesday night.

The track for Dorian has largely remained the same, though wind speeds and rainfall amounts have increased since the NWS issued a hurricane warning for Beaufort County late Wednesday morning.

Impacts from Dorian could be felt as early as Thursday morning with wind picking up; by the afternoon, rivers and creeks will begin to rise, according to Glenn.

Western Beaufort County can expect eight to 10 inches of rain; eastern Beaufort County, 10 to 15 inches. Belhaven, Aurora and areas east fall into the “high wind threat” category: Belhaven is projected to have sustained winds of 59 mph; Aurora, 60 mph. Wind and rain are expected to continue from Thursday afternoon through Thursday night, into Friday morning.

Projected storm surge — three to six feet— may seem relatively low in comparison to past storms, but officials warned that all storm surge is life-threatening.

“Winds are going to be picking up late tonight, early tomorrow,” meteorologist Casey Dail asid Wednesday  afternoon. “You could begin to see elevated water levels starting tomorrow (Thursday) afternoon. The surge is going to be ahead of the storm. … Water levels start rising tomorrow (Thursday), peaking Thursday night and early Friday. A lot of it could happen after dark, so that could be of concern for folks.”

What could increase storm surge is Dorian slowing down or stalling over the area, as both hurricanes Irene (2011) and Florence (2018) did, but Dail said forecasters are confident that won’t be the case.

“I don’t think that’s going to happen. Everything’s been pretty consistent that it will be moving quickly, and that it won’t stall,” Dail said. “It’ll be moving fairly quickly, as opposed to the last few storms that have impacted the area.”

Local meteorologists are confident in all their forecasts.

“I think what we have right now is pretty accurate for what we can expect for the area,” Glenn said.

Protect against life-threatening surge having possible extensive impacts across coastal eastern North Carolina. Potential impacts in this area include:

Protect against life-threatening wind having possible extensive impacts across coastal eastern North Carolina. Potential impacts in this area include: