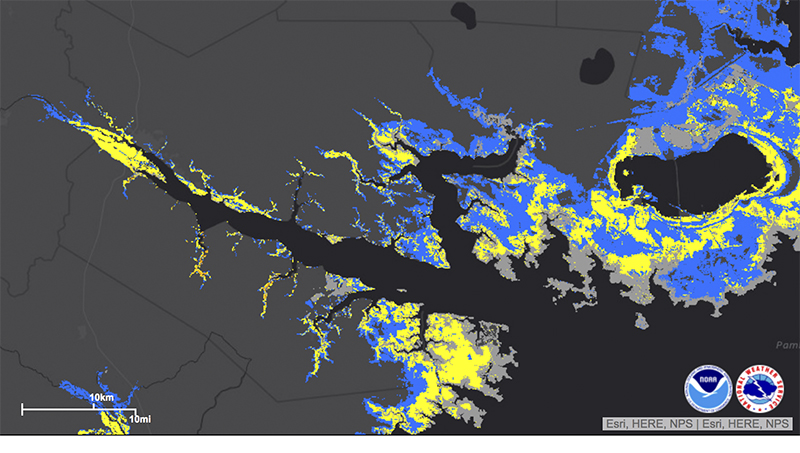 The 8 a.m. update by the National Weather Service, Newport/Morehead City office calls for increased wind and rain threats for Beaufort County and a slight change in track that has Dorian’s eye making landfall at Cape Lookout and continuing over the southern Outer Banks.

While outer rain bands have already come ashore near Wilmington and Jacksonville, in Beaufort County, weather should start to deteriorate by early afternoon. By 8 p.m. Thursday, residents can expect heavy rain and hurricane-force winds that will increase through the night, into early Friday morning.

The increase in rainfall amounts looks like 10 to 15 inches throughout the county. Belhaven, Aurora and areas east fall into the “high wind threat” category: Belhaven is projected to have sustained winds of 64 mph; Aurora, 69 mph, with gusts as high as 84 mph in Aurora and 82 in Belhaven. Along the Outer Banks, wind gusts could be as high as 120-plus mph.

Projected storm surge has gone up by a foot in local waterways, from three to six feet above ground to four to seven feet. Rivers will began to rise ahead of the storm, peaking as the eye draws parallel, then will recede, but continue to stay above normal levels due to runoff from torrential rain.

All information comes from the NWS Newport/Morehead City 8 a.m. webinar. Stay current with updates throughout the day into Friday.

Protect against life-threatening surge having possible extensive impacts across coastal eastern North Carolina. Potential impacts in this area include:

Protect against life-threatening wind having possible extensive impacts across coastal eastern North Carolina. Potential impacts in this area include:

Dorian to arrive Thursday with wind, rain and surge