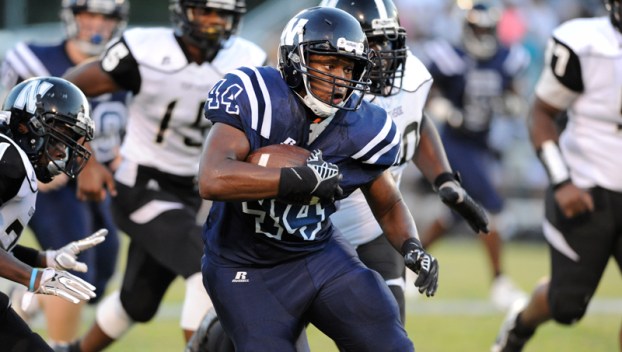 POWER RUNNING: Washington’s Michael Clark ran for a touchdown in the third quarter of Thursday's game to give the Pam Pack a 24-20 lead over Kinston, but it wasn't enough, as the Vikings scored late to win, 27-24. (Ashley Vansant | Daily News)

Pam Pack battles hard, can’t quite come up with win

KINSTON — Washington’s playoff hopes took a hit Thursday night, as the Pam Pack fought valiantly on the road against undefeated conference leader Kinston, but couldn’t make the plays it needed late in the game, falling to the Vikings, 27-24.

Washington (3-5, 1-3 2A Eastern Carolina Conference) running back Michael Clark gave the Pam Pack a 24-21 lead late in the third, its first since the opening quarter, by rumbling into the end zone for a 5-yard score. It was a lead Washington held until 5:38 remained in the game, when Kinston (8-0, 4-0 2A ECC) quarterback Kieran Hooker found Jacel Jacobs in the end zone for a 25-yard touchdown.

The Pam Pack fought desperately to score again in the final minutes of the game, but the Vikings stuffed a Washington fake-punt attempt, and stopped Washington on fourth down on the Pam Pack’s next possession, assuring Kinston a win on its Senior Night.

“The loss was a tough one on our kids,” Washington head coach Jon Blank said. “They battled their tails off for four quarters and they weren’t rewarded with a victory. I told them after the game that in three of our losses this season, I’ve been prouder of their effort than I have been in several of our wins from the past three years. Unfortunately, in some of our better-played games we haven’t walked away with victories, especially against some really good opponents, like Kinston.”

Washington found itself in a hole right from the opening kickoff, as the Vikings’ Mechaelin Davis returned it 70 yards to give Kinston a 7-0 lead. The Pam Pack responded immediately, marching down the field and scoring when quarterback Antwone Godley plunged into the end zone from a yard out.

Finally getting on the field, Washington’s defense forced Kinston into a quick punt. Godley then completed a long pass to Ka’ci Foreman to get the Pam Pack to the Kinston 25. But Washington couldn’t quite get the ball into the end zone, with the drive sputtering at the 5, forcing the Pam Pack to settle for a Hunter Hall field goal, which gave Washington the lead, at 10-7.

At that point the Kinston offense began to click, as the Vikings scored on their next two possessions to take a 21-10 lead. Needing to cut into Kinston’s lead before the halftime break, the Pam Pack answered back with a 65-yard drive that culminated with an 8-yard touchdown run from Godley. Washington had an opportunity to put three more points on the board after forcing Kinston to turn the ball over on downs in the Vikings’ territory, but Hall missed a field goal right before the second quarter ended.

Washington’s close loss to a tough opponent in Kinston was similar to the Pam Pack’s earlier losses to D.H. Conley (6-2, 4-0 3A ECC) and Ayden-Grifton (5-4, 2-2 2A ECC), in that Washington showed it could compete with those teams, but couldn’t quite make the plays late to come away with a win.

With the loss, the Pam Pack now stands in fifth place in the conference with two games remaining. At this point, Washington will need to win its final two games and hope a team like Ayden-Grifton drops a game or two. Blank said he has his team focused on taking care of what it can and seeing how the rest plays out.

“The only thing that we can do is control our destiny, which is we have a game against West Craven next Friday, and we need to win that game, and then we have a game against North Lenoir and we need to win that game,” Blank said. “If we do that, we’ve at least controlled our end of the deal. And, yes, sometimes we need some help from other people, and we’re just going to hold out some hope that that can happen. But we’ve got to take care of our end; we can’t really worry about what happens everywhere else.”

RALEIGH — For the upcoming harvest season, a new size limit will be in place for inland waters within the... read more