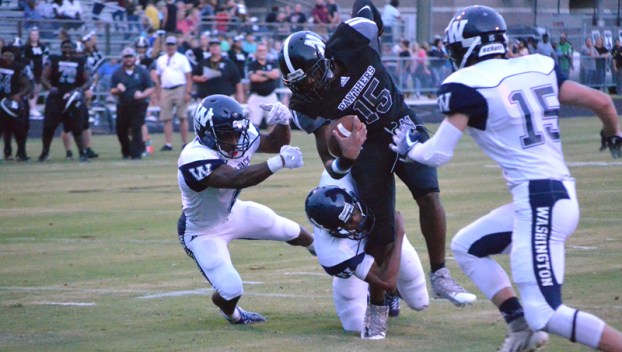 Through four weeks, and officially 25% of the regular season, teams have started to find the identities of their football teams, despite weather chopping up the weekly preparation schedules. Most area teams are prepping for one last out of conference game before beginning their conference schedules.

The Pam Pack began their season with a 35-0 victory over the North Pitt Panthers. They took a lackluster first half and turned it into a blowout victory, riding the coattails of their running game. After a week two loss to Tarboro, and Hurricane Dorian moving the D.H. Conley game to the middle of October, the Pam Pack made a trip to Northside in Pinetown this past Friday night and got caught in a dogfight for four quarters. After a back and forth affair, the Pam Pack took advantage of a turnover on downs in the middle of the fourth quarter and were able to milk the clock with their running game and score to seal the win. Washington improved their record to 2-1, and many running backs are over the century mark in rushing yards on the season. Mykel Warren leads the team with 204 yards and a touchdown, Jaden Hambric has 201 yards with two touchdowns, Antwone Godley has 185 yards with two rushing scores, Terry Moore has 157 yards and a touchdown, and Kris Hill had three touchdowns against the Panthers on Friday night to lead the team in touchdowns. Washington will host First Flight High School on Friday night.

The Panthers have been playing well and improving each week despite several game time changes already this season. After Friday night, it looked like the Panthers settled into their season and have cleaned up a lot of mistakes from early on in the preseason and early season, especially in the turnover department. The Panthers have been very fortunate to come away with victories after putting the ball on the turf seven times against Camden County, but not a single time against the Pam Pack. One interception was the only turnover committed by the Panthers.

There are several players having breakout seasons for Northside thus far, including senior running back Zakkai Wilson, who has 446 yards on 44 carries through four games with nine touchdowns. That’s an average of 10.1 yards per carry.

James Gorham has 260 yards and five scores, averaging 8.4 yards per carry. Tyler Modlin has 182 yards rushing with a score this season as well as eight catches for 114 yards. Modlin suffered a neck injury on Friday night, but walked off the field on his own power. Tyler Turner leads the team with 10 receptions for 177 yards and a touchdown, as starting quarterback Carter Boyd has gone 21-for-36 with 308 yards passing with a touchdown this season. The Panthers will travel to Manteo in their last non-conference matchup.

The Seahawks have struggled this season and are still in search of their first victory. They have played three quality teams to begin the season in Ayden-Grifton (3-0), Dixon (2-1) and a Granville Central (1-2) team from the Raleigh area that plays amongst a competitive conference. There is still plenty of time for the Seahawks to turn things around, as they have a couple of non-conference opponents that are very winnable matchups, and then they will begin conference play after this week. The Seahawks have suffered a few key injuries, especially on the defensive side of the ball that have hindered them a bit, as Keywon Campbell and Shantez Clark have both been out with injuries the past two weeks.

The Seahawks begin their season 0-3 for the first time since 2013, but they do have a familiar opponent in North Duplin coming up this Friday night. They have played the Rebels every season for quite some time, but since 2009, the Seahawks are 3-9 against them. In their last meeting late last season, North Duplin took home a 21-7 victory. However, Southside’s cross-town rival Northside defeated the Rebels 21-7 in week two this season.

Washington 34, Northside 23 In a very competitive battle, two teams gave it everything they had, and the Pam Pack... read more