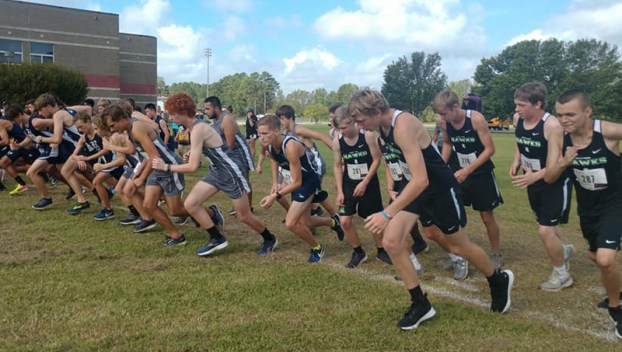 TAKE OFF: Runners get set to take off at the Panther Invitational on Saturday morning at Northside High School. Many Beaufort County runners placed well, including Southside’s Ethan Sommers who finished first in the event. (Adiela Serralde)

PINETOWN — For the second consecutive season, the Northside Panthers have hosted the Panther invitational with success. This year, out of 12 participating schools, Beaufort County represented well amongst many runners around eastern North Carolina.

Southside’s Ethan Sommers zoomed through the track and finished with a time of 17 minutes and 55 seconds, a full minute and 20 seconds faster than the second place finisher. Sommers was the only male participant for Southside, but came away victorious, also setting a track record.

For Northside, Thomas Boyd came in 13th for the event and first for his school, coming in with a time of 20:14. Brent Holland and Justin Bell both came in within a second of each other and embraced one another after coming in 40th and 41st with times of 22:16 and 22:17.

As for the girls, Caroline Boyd turned in an impressive fifth place finish with a time of 23:47, and Jasmine Carawan came in second for Northside and 28th overall, and head cross-country coach Bob Girani praised them for their finishes.

“(Carawan) came back from a long distance and got up through the field, she’s a trooper,” Girani said. “We have some coachable runners. We’re pretty fortunate. We had a lot of kids running that have never run before and they really produced. They ran their hearts out. I’m extremely hopeful and enthusiastic.”

Leah Cahoon, Candence Nimons and Sydney Baker crossed the finish line and earned points for the Panthers in the event as well.

With the event being so early in the season, Girani said that it was kind of a pain in the neck because there wasn’t a lot of time to prepare, but there will be plenty of meets going forward for his runners to be able to improve.

“Preparing for an event that size, it’s a bear. It takes a lot,” Girani said. “I think the boys can probably finish second in the conference. The younger kids that are just starting out are the ones that are going to need to increase their speeds and be more selective (on the course).”

Girani also explained how difficult it is to improve in this sport. It’s more than just putting one foot in front of the other. Running with pain and through pain every step of the way is as much mental as it is physical, and these runners deserve some credit.

The Panthers’ next meet will be at Tarboro at Indian Lakes on Wednesday afternoon, and will return back to Northside for a meet next Wednesday

Washington 34, Northside 23 In a very competitive battle, two teams gave it everything they had, and the Pam Pack... read more