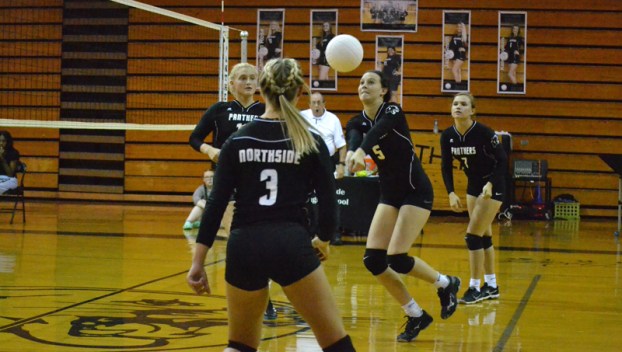 BUMP: Northside junior volleyball player Rylie Norman (#5) receives the ball and bumps it to one of her teammates in the lady Panthers’ 3-0 victory over South Creek on Tuesday evening.(Mitchell Thomas / Daily News)

PINETOWN — The Pinetown lady Panthers improved their record to 3-1 on the season Tuesday evening after sweeping away South Creek 25-13, 25-20, 25-13. The Panthers have found plenty of success this season outside of one hiccup at Riverside earlier this season.

“We’ve played good all year except when we went to Riverside,” Junior Kathleen Slade said after the game. “We’re coming for them next time. We just play better against good opponents. We were kind of slack today.”

Despite the slack, the Lady Panthers turned out a 3-0 victory on the evening. Slade was a big part of the victory by earning multiple kills during each set and really gave the Panthers an advantage.

Head coach Michelle Leathers was high on her team after the victory, and mentioned that future looks bright with three freshmen earning spots on the floor early in their careers.

“We’ve been doing good, we’ve had to make some adjustments, we have people playing out of position, and I actually have three freshmen on this varsity team,” Leathers said about Hannah Baker, Riley Respess and Madison Allen. “It’s very encouraging for the future. But, our number one thing (we need to improve) is our communication, sometimes tonight they were running into each other — which we normally don’t do.”

Leathers also explained that every year as coach they have finished third in the conference at the end of the season. Leathers and the players alike are determined to have a better finish than in year’s past.

“The goal is to be conference champs,” junior Rylie Norman said after the victory. “We need to do a lot better with our communication and things like that though, like it’s the beginning of the season, so we’re still getting a grasp on things but we’re getting the hang of everything now.”

After hosting the Tarboro Vikings today, the Panthers will be on the road to Southside, Jones Senior and Bear Grass next week and into next Monday.