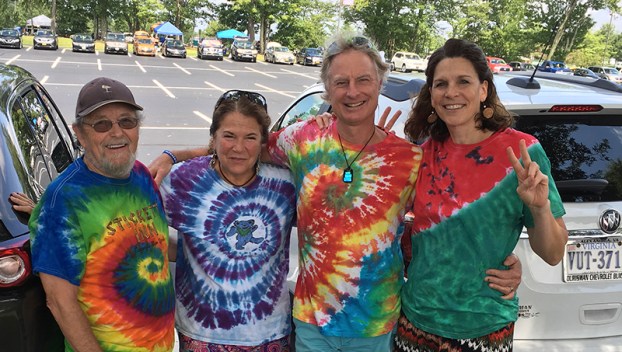 I came upon a child of Woodstock

I went to Woodstock three weeks ago on the weekend it turned 50.

Allison and I went to hear Santana, one of the bands at the first Woodstock, and the Doobie Brothers, but I knew we also wanted a Woodstock experience. On that Saturday, along with Allison’s sister, Sharon, and their Uncle Butch, who attended the original Woodstock, and all of us clad in tie-dyed shirts, we stood at the top of a rise and looked down a long sloping hillside surrounded by wooded groves, ponds and a creek.

Today, there is a carpet of grass stretching to a small shallow at the bottom where the original gigantic stage sat. On that rise, there now is a big sign with a photo of 500,000 “hippies” crammed together in August of 1969 at the height of 1960s social disruption and violence. Seventy-two hours of heat, sun and rain turned the hillside into an earthy, raw and intimate carpet of humanity. Teens, twenty-somethings and older came from the East and West coast and from middle America. By sheer volume of numbers, concertgoers peacefully shut down highways for miles, stopping the daily existence of life in those parts. They listened to music, the beating heart and deep soul of their identity: rock, folk, a little country and a dab of doo-wop. For attendees (and the millions that couldn’t make it), the music became harmonies of hope and dirges of dark times passed and still to come.

I was 12, Sharon, 5, and Allison, 1, when 23-year-old Butch made the journey to Woodstock with his 7-months-pregnant wife. They went for the “music and community.” What they got was a three-day break from the burning images of war, race riots, the residual collective depressions from two assassinations, the beatdown of young and socially-conscious protesters at the 1968 Chicago Democratic Convention, and — to listen to Butch — the list went on and on.

“For days afterwards, I walked around with that experience altering how I looked at the world and others,” he said, as we sat on blankets on the amphitheater lawn and waited for the rain to stop and Doobie Brothers to open for Santana.

Butch was a child of Woodstock and it profoundly changed the arc of his life, from living on a commune to walking across America with Xena, his Siberian husky, at the age of 65.

Between bands playing, we wondered if our society felt less safe, more divisive on that hillside 50 years ago, or now, sitting under umbrellas waiting for Santana.

Dairy farmer Max Yasgur explained to town leaders against the festival and an invasion of hippies why he rented his farm to promoters:

How many Max Yasgurs are left in this world to make it safe? I wondered. It just took one.

That night we were on our feet for five hours, dancing and singing to music of our generation and younger. The Doobies gave way to periods of thundershowers with impressive streaks of lightening that continued through the electric performance of Santana. We could not help but note history repeats itself, if just for a day.

Robert Greene Sands is an anthropologist and the president of Pamlico Rose Institute for Sustainable Communities.

Sound Off doesn’t count in the democratic process