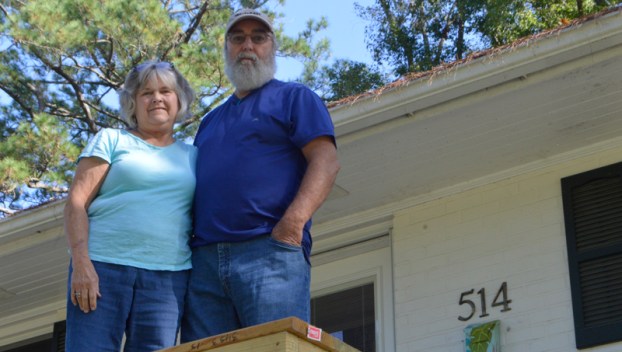 HIGH AND DRY: Robert and Nel McLawhorn stand on the newly-constructed porch of their Washington Park home, which was elevated in June. A year after Hurricane Florence, they are just now preparing to tackle rebuilding the home’s interior. (Matt Debnam/Daily News)

For Robert and Nel McLawhorn, of Washington Park, Hurricane Florence remains stark reality. A year out from the storm, the couple haven’t been able to move back into their home, but have made significant progress in making it livable once more.

Last September, the two watched their home flood from a neighbor’s house where they were staying during the hurricane. When the waters receded, they found their home had had three to four inches of water inside during the storm, more than enough to cause serious damage.

“Whether its three inches or three feet, you’ve got to basically demolish and start over,” Robert McLawhorn said. “Our journey is going to be a little less than some of the others in the community that had higher levels, but it’s a process everybody is going to go through, regardless of that level.”

In the past year, the couple has received what Nel McLawhorn calls “an education,” as they navigated the world of flood recovery and all that comes with it. FEMA, SBA, ICC — the two, by necessity have become intimately familiar with a swirl of acronyms and programs enough to make anyone’s head spin.

The first, and most immediate, question the couple faced was one of the most basic. Realizing that their home was now uninhabitable, they needed a place to stay.

The couple’s children and their friends came that day to help them move items out of their home and into storage. The same day, the McLawhorns were fortunate to find an affordable loft apartment to rent nearby, off of Whootentown Road. For the past year, that’s where they have lived, traveling back and forth to Washington Park to oversee the restoration of their home.

The next steps came in quick succession. In the immediate aftermath, the two filed a claim with their insurance company and registered with FEMA shortly there after. The grand total in FEMA assistance for the McLawhorns was $1,120.

“They basically said ‘thank you very much,’ and with our Social Security, me working part time and her retirement, we overqualified, other than just two month’s rent to get out of the house and get established,” Robert McLawhorn said.

While FEMA does assist with hazard mitigation grants that can be used to elevate a home, to do so can take years. The McLawhorns know of at least two homeowners in their neighborhood who have been waiting for at least a decade for one of those grants.

For the couple, their flood insurance covered the flood damages inside the structure. Another program through their insurance company, known as Increased Cost of Compliance, provided $30,000 to help raise their home because the structure had incurred damages equal to 50% of its value. The payout from that program, however, only comes after the work is completed.

To help cover the cost of elevating their home in the meantime, the McLawhorns took out a low-interest disaster loan from the Small Business Administration. Now, after a year of work and navigating insurance, FEMA, SBA and the world of contractors, the McLawhorns have progress to show for their efforts, even though there’s still a long way to go yet.

Their home has been elevated above the community’s base flood level, lifted by Expert Movers, the same company that moved the Cape Hatteras Lighthouse. Masonry work is underway, and they are preparing to start working on restoring the interior with a general contractor. In addition to restoration, the SBA loan will also help them make some new additions and renovations to the home. Despite the headaches and heartaches that have come with the process, the couple says there is a light at the end of the tunnel.

The couple also has four thick plastic binders, each packed with documentation and information about the actions they’ve taken to recover. Along with those experiences, they’ve also gained knowledge of the recovery process, some through government agencies but mostly through networking with others in similar situations.

“We just started conversations about what we found out and it was kind of a joint recovery process,” Nel McLawhorn said. “Although we hated to have neighbors that flooded, it was very comforting. We were gathering knowledge and sharing knowledge. Robert and I feel like next time it floods, we would be so willing to help people. We have learned so much.”

The Washington (Noon) Rotary Club mourned the death of a club member and dear friend this week, following the death... read more