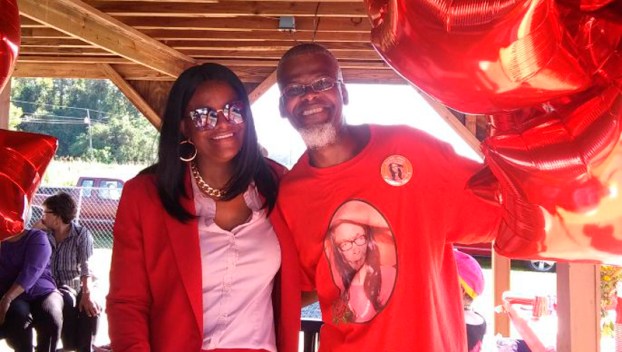 HONORED: Ella Mae “Babe” Crandall Thomas’ family members gathered Saturday in Grimesland Park to honor the self-made real estate guru and owner of “Babe’s Place.” Included in the celebration was a dedication of a park bench and plaque for Grimesland Park. (Pamela Johnson)

In the 1960s, “sit-in” movements swept the country from North Carolina to Kansas. In Greensboro, four A&T University students made history, leading a sit in to call attention to racial injustice.

During that time of unrest for Americans, inequality touched many aspects of life in the South. Then, North Carolina was a leader in rolling out Fair Housing laws, and the North Carolina Building Code created innovative strategy for construction of outhouses and shanties.

Also then, black businesswomen were an unheard of phenomenon. That is, until “Babe” Thomas came along with her own solution to equal opportunity housing.

Ella Mae “Babe” Crandle Thomas was born in Beaufort County on June 14, 1928. She was the daughter of sharecroppers Stephen and Argusta Leggett Crandle, and was the third child of 13.

Babe Thomas shared a room with 12 siblings in a 3-bedroom house. Danny Thomas, Ella Mae’s youngest son, said his mother grew up in a shotgun house, “The kind where they say you could shoot a bullet straight through it,” he laughed.

Perhaps it was her own housing situation growing up that fueled her desire to help others in the community who faced housing discrimination.

The house Babe Thomas grew up in was owned by a farmer who decided when she and her siblings would go to school and when they would work the farm, often at the last minute when they were already dressed for school, according to Danny Thomas. In those days, people worked to keep housing — “No work meant nowhere to lay your head,” Danny Thomas said.

Babe Thomas promised her own children that would never happen to them.

“And it didn’t,” Danny Thomas said. “This is where her strong belief in education came from.”

All of her grandchildren graduated college, and all, with the exception of one, attended historically black colleges and universities. While she had no formal education, her winning, but firm, personality, great sense of humor and positive attitude more than made up for her educational shortcomings, according to her family members.

Babe’s husband, Henry Thomas, joined the military in the 1940s. His work kept him away from North Carolina for many years, and she occupied her time by working outside of the home and taking care of her six children while living on Washington Street, in Washington.

By the time the women’s movement arrived in the 1960s, she was already an independent woman. She acquired the motto, “Business ain’t nothing, but business. Just take care of business.” Later, this motto was taught to her kids and grandkids. By the time Henry Thomas retired from the Marines, she was already a savvy businesswoman with a growing sense for real estate. In the mid-’60s, they built a home on Smithtown Road in Grimesland. Her youngest son, Danny, was born there.

Later, a 3-bedroom home was added to the property and rented out. Three mobile homes followed and rented out to black and white people in response to the housing discrimination.

Many people lacked transportation in the community, making shopping a difficulty, so in 1976, she turned her garage into a convenience store called “Babe’s Place,” serving at least 40 Grimesland residents a week.

Before anyone knew it, Babe Thomas was a real estate guru, practicing her own fair housing laws, renting to black and white people, living by the motto “Treat people the way you want to be treated.” When she died on Aug. 25, 2018, family members estimated more than 200 acres of land had passed through her hands in real estate deals over a period of nearly 60 years.

On N.C. Highway 33, the little red store with white shutters and white icicle lights hanging from its roof sits tucked away back from the highway. The vintage sign out front, though worn, no longer swings back but the faded lettering still reads “Babe’s Place,” reminding passersby that Babe Thomas lived the last 55 years of her life at Smithtown in Grimesland, focused on the needs of her community, including housing and education.

On Sept. 21, Babe Thomas was honored with a dedication ceremony of a bench, plaque and tree in Grimesland Park. More than 100 people came together for the ribbon-cutting ceremony, including Mayor Eleanor Farr, the park’s board members, Babe Thomas’ children, grandchildren and great-grandchildren.