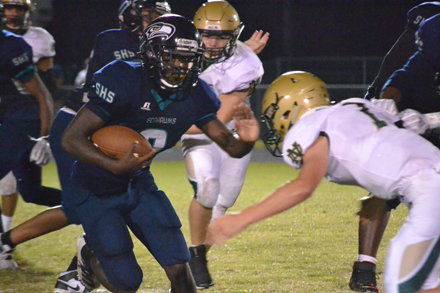 It’s a big week around Beaufort County for football teams as they prepare for their first conference games of the season. The conference schedule is a brand new season, and three area teams will look to begin their conference seasons 1-0.

The Pam Pack picked up three wins in their non-conference schedule with the only loss coming from Tarboro. The Kinston Vikings have had the Pam Pack’s number the past few seasons. Every game since 2015 has been within two possessions. The last Washington win over the Vikings came in 2014 in a 30-0 win in the first round of the playoffs. The Pam Pack also won during the regular season in 2014, 21-0.

This season, the Vikings have a very capable quarterback of making downfield throws and will test the Washington secondary. Though Kinston has two losses to Fike and Jacksonville already this season, they know just as well as Washington that conference play is a clean slate.

Kinston will line it up in shotgun and in a wing-T look. The Vikings showcase some big, physical wide receivers and running backs that they like to get to the edges and out in space. The wide receivers do a good job of sealing blocks down field and holding them long enough for their playmakers to get past.

Kinston quarterback Demetri Holmes may cause some problems for the Pam Pack defense, as well as their big offensive front. They like to have moving pieces and Holmes rolling out of the pocket to give him an option to take off. Defensively it looks like the Vikings are multiple up front sometimes lining up in a 4-3 or a 3-4. Expect this to be a one-possession game, much like the previous couple of seasons.

In the end, Kinston rallies behind the home crowd and comes out on top for the fifth year in a row.

The Seahawks are riding high after notching the win column for the first time this season over North Duplin on Friday night. The offense was firing on all cylinders and the defense made big stops when it needed to. However, this South Creek team is no slouch. They did defeat their first two opponents in Bear Grass and Perquimans, but are currently on a three-game skid with losses to Riverside, KIPP Pride and North Edgecombe.

The last two seasons, the Seahawks have fallen short against the Cougars. Last year, a defensive struggle ended in a 7-0 game and a 29-24 game in 2017. The Seahawks’ last win in the series came in 2016 during a 41-16 route and an 8-0 victory in the first round of the 1-A state playoffs.

South Creek likes to spread it out with a lot of receivers, but they run it quite a bit. They’ve already clipped 1,000 yards on the ground this season averaging 8.3 yards per carry, and 251.5 yard per game. Two quarterbacks have combined 11-for-44 passing for 333 yards and three touchdowns to two interceptions.

The Southside defense is dealing with some injuries at the linebacker position but young guys filled the void last week against North Duplin well.

Look for Southside to get their second consecutive win and first road win of the season on Friday night against the Cougars.

The Panthers are coming off a tough loss to Manteo last week that ended in a 40-28 shootout. This week, they’ll be playing an already thin Trojans team that played a Hurricane Dorian make up game on Tuesday night against North Duplin. The Trojans lost 48-6.

At the beginning of the season Jones Senior was struggling with numbers, only fielding around 16 players on the team. They have increased that number as the season has progressed to 22 according to MaxPreps.com.

It’s not secret that the Trojans are in a rebuilding stage and have found it tough to score points thus far into the season.

The Panthers have lost two consecutive games that were decided by two possessions, and they will get a chance to bounce back and rest some key guys this week on their way to their fourth victory of the seasons.

Beaufort County teams put up a lot of points this past week. The Southside Seahawks put up 41 in their... read more