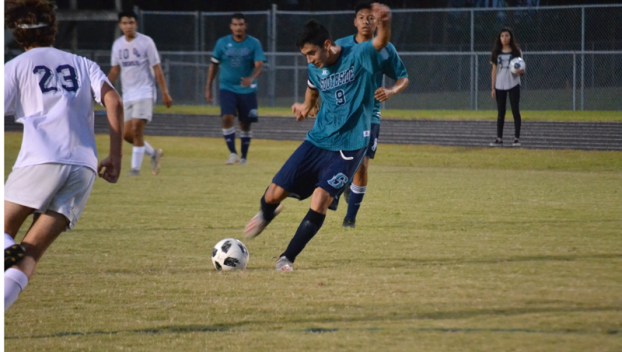 LONG DISTANCE: Southside’s senior mid-fielder Jaime Guzman takes a rip from about 20 yards out and bends it into the side netting in the second half of Southside’s 8-3 win over South Lenoir on Thursday night. (Mitchell Thomas / Daily News)

CHOCOWINITY — Southside’s Jairo Juarez earns a hat trick on the Seahawks’ way to a 8-3 victory over South Lenoir on Thursday night, and begin the season 10-0 heading into the meat of their conference schedule.

It didn’t take long for the Seahawks to begin scoring. Only six minutes into the game, Jaurez found an opening and put away the first of his three goals. Later in the first half, Jaime Guzman waited for a corner kick to bounce off the first wave of players to the back post. Guzman stuck his foot out and poked it into the goal for a 2-0 lead. Victor Gonzalez and Ethan Sommers would also score in the first half to extend their lead to 4-0.

The Devils would score a few goals in the second half, as head coach Jay Petty switched the lineup around the get younger guys in. Johan Prado only allowed a single goal and collected 14 saves on the evening before Johnathan Hernandez took over in goal. Hernandez would pick up three saves.

“We came out really strong, which I was really pleased with,” Petty said after the game. “We faltered a little bit Monday night against Hertford County. We were a little slow and a little sluggish, but we were not slow and sluggish tonight. We just kept the pace going for pretty much the entire game and I made some changes towards the end. I’d say for the first 60 minutes we played some really good soccer.”

The Seahawks now turn their attention to conference play, as they will host Tarboro on Monday evening and travel to Northside-Pinetown on Wednesday afternoon.

“It’s good to be undefeated heading into conference, but we can’t let that get to us,” Hernandez said. “You never know who can beat you if you don’t bring it. We just need a little bit better passing and keep up our team work and we can beat any team.”

Petty said the last two seasons the Seahawks have gone undefeated in conference play, and he hopes his team can do that again this year.

“All the teams have been getting better in the conference each year, I could see anybody in the conference walking away with something. Right now, I’m just telling the boys, ‘It’s one game at a time.’ Tarboro is Monday night, we’ll worry about that one now and everything else later.”

For 72 minutes, the Washington Pam Pack and John A. Holmes were stuck in a deadlock. After a handball was... read more