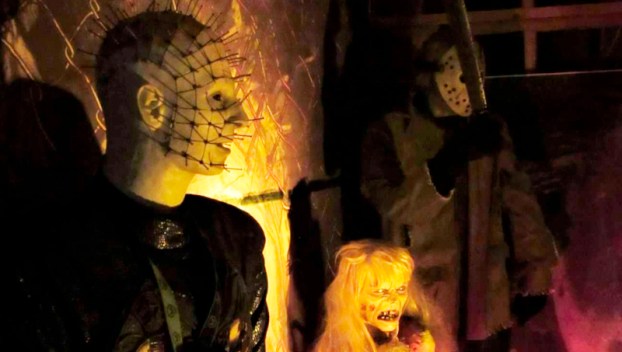 Haunted carnival comes to Raised in a Barn Farm in October

Circus freak shows, killer clowns and terror under the big top — a haunted carnival is coming to Chocowinity in October, as Raised in a Barn Farm presents its sixth-annual Nights of Fright haunted trail. The scares kick off this Friday at the farm and will continue every Friday and Saturday in October, with the final frights coming on Oct. 31, Halloween night.

Featuring a team of dedicated actors and artists, the event takes guests on a winding trail through the woods behind the farm, with scares at every turn. According to Raised in a Barn Farm owner Mandie Boahn, the event would not be possible without their efforts.

“We have a lot of dedicated, good people on our side,” Boahn said. “They work nonstop, tirelessly with us, coming up with all the ideas and the creations. Our makeup team really steps up to the plate and creates all of these wonderful faces for everyone to see.”

A new attraction this year, Nights of Fright will feature a macabre museum of horror film memorabilia courtesy of Washington collector Junius Swain. For years, Swain has displayed his collection during the Halloween season at Junius’s Haunted Graveyard, attracting many curious onlookers to his home on Main Street in Washington.

“He’s now at the farm this year, so everybody can come in and see the museum and learn some of the history behind some of the memorabilia he has from some of your classic horror movies,” Boahn said.

Also new for the 2019 season, the farm will be host to a new horror film festival created by the frightening minds at Haunted Pamlico. “Carnival of Darkness: The Haunted Pamlico Film Festival” will run from 10 a.m. to 4 p.m. at Raised in a Barn Farm on Oct. 12, and feature a selection of frightening films from around the world. Screenings will continue into the night once Nights of Fright opens for the evening.

For those too young or too frightened to walk the trail, there will be games and a non-haunted corn maze on site as well.

Last year, Nights of Fright averaged between 500 and 1,000 visitors per night. That’s up from a total of 800 visitors during the first event six years ago. For Boahn and her husband Will, the goal is to make the event the biggest haunt in eastern North Carolina.

“We have a long way to go, but we have grown a lot in the six years we’ve been doing it,” Boahn said.

Nights of Fright runs from 8 p.m. to midnight Fridays and Saturdays in October, as well as Halloween Night. Tickets are $20 per person, cash only, with a $5 discount for military, first responders, teachers, nurses and students, with a valid ID. Raised in a Barn Farm is located at 2100 N.C. Highway 33 East, Chocowinity. For more details, visit www.raisedinabarnfarm.com.

Community service is one of the highest tenets of scouting, and Boy Scout Troop 21 has embodied that spirit in... read more