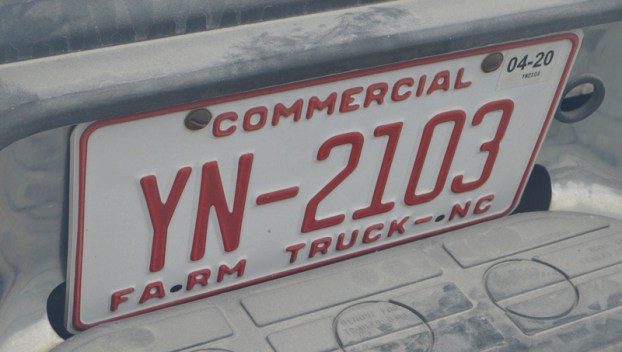 EXEMPTION: Under North Carolina’s state seatbelt law, vehicles with farm license plates are exempt from the law when engaged in “agricultural purposes.” The law, however, doesn’t clearly define what those purposes are.

It’s a phrase most North Carolinians are familiar with, but for those with farm tags, the state’s seatbelt law isn’t exactly black and white.

Recently, Frankie Purser, of Vanceboro’s Garland Purser and Sons, received a citation from the North Carolina Highway Patrol for a seatbelt violation. He was pulled over in the parking lot of Dollar General in Chocowinity, and he contends that he was using his vehicle for agricultural purposes at the time, and that the patrolman who wrote him the ticket disagreed.

The license plate on Purser’s truck is commonly known as a farm tag, a special plate issued for vehicles operated primarily for carrying farm products and farm supplies. According to the state’s seatbelt law, vehicles with those plates are exempt from the seatbelt law, but only “while being used for agricultural purposes in intrastate commerce.”

That’s where the confusion comes in. The law leaves room for debate about what constitutes “agricultural purposes in intrastate commerce.” Does it mean riding from field to field to check crops? Hauling those crops to a market 50 miles away? What about a trip to town to get supplies from Walmart and Tractor Supply?

“I’ve called the Agricultural Commissioner’s office and they have a legal department there,” Purser said. “The attorney for the Department of Agriculture could not find a legal definition for ‘agricultural purposes.’ Under 20-88, it says any farm supplies that could be used on the farm.”

According to N.C. Highway Patrol Sgt. Gary Brown, however, the law is not so cut and dry. Because the law is vague, Brown says it falls to the individual law enforcement officer to determine if the farmer is engaged in agricultural work.

“The Highway Patrol has conferred with various district attorney’s offices on how they interpret it and what sort of standards that they use,” Brown said. “There’s really not a consensus across the board.”

Ultimately, Brown says the spirit of the seatbelt law is about saving lives and preventing injury. For officers who pull someone over, speed, location, time of day and a variety of other factors play into whether they believe a farmer is engaged in agricultural purposes.

“The legislature didn’t do us a whole lot of favor by leaving it as vague as they did, but the officer is left there to determine,” Brown said. “If you don’t agree with it, you need to go sit down in front of the judge and have that trial or conversation. That’s what he’s there for. Sometimes they deserve it, and sometimes they don’t.”

For District Attorney Seth Edwards, the seatbelt exemption for farmers is a question that comes up often. He agrees that the law is not crystal clear and says he usually leaves it to the judges to make a decision on the matter.

“First and foremost, I am a firm believer that seat belts save lives,” Edwards wrote. “Many farmers have approached me over the years and feel if they are driving a truck with farm tags into town to meet with an insurance agent or get a part for a tractor, that is considered an agricultural purpose. I disagree. To quote a former legal counsel for the State Highway Patrol, ‘Is that driver any less likely to get in a wreck than you or I?’

“On the other hand, I believe the seat belt exemption for farmers was designed with this in mind: a farmer in a rural area driving from one tract of land to another, a short distance, in which the farmer never reaches a high speed. In other words, frequent stops, short distances, low speeds. That person is less likely to be involved in a wreck. At the end of the day, how hard or inconvenient is it to secure a seat belt if it could save a life?”

Purser’s court date for his violation is scheduled for Nov. 18, right in the middle of soybean harvest. It’s at least going to cost him $179 in penalties and court costs, the equivalent, he says, of about half-acre to an acre of corn.

CHOCOWINITY — A new horror film festival is coming to Chocowinity next weekend, screening terrifying flicks from around the world.... read more