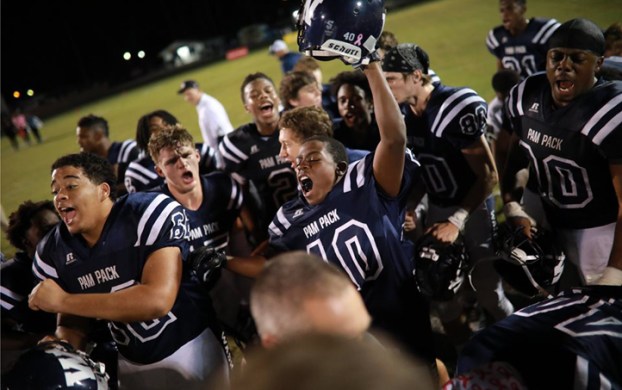 Three Beaufort County teams came away victorious on Friday night, and were accompanied by some outstanding performances. Washington dominated Ayden-Grifton, 37-12 and they are now tied for first in the conference with West Craven. Northside had a come from behind victory on Friday night at Riverside, raining on the Knights’ homecoming parade. Pungo Christian Academy got their first victory of the season in a 48-0 blowout over Community Christian, and Southside had their hands full with Tarboro, but now focus their attention on highly touted running back Savone Tutt and Pamlico County for next Friday night.

Walt Gerard had another outstanding night from the linebacker position, collecting 16 total tackles on Friday night with two tackles for a loss. The Washington defense has strung together an impressive display the last few weeks, dominating their last few opponents up front. The defense is only surrendering 10 points per game in their last four contests, not counting the kick return for a touchdown they allowed against Kinston. The Pam Pack also gave up a kick return to their 4-yard line on Friday night that resulted in a Chargers touchdown.

Offensively, the Pam Pack continues to get it done. After a relatively slow start to the first half, Washington scored 27 second half points to ice the game away. Antwone Godley had two rushing touchdowns. One came from 12-yards out and the second came from a 48-yard scamper to the end zone. Kris Hill scored the other offensive touchdown for the Pam Pack in the first quarter from one-yard out.

The Panthers grabbed the momentum just before half in a game they trailed 25-7 at one point. Omari Crandell and Fred Taylor forced fumbles late in the second quarter, and Mitch Godley picked up the second of the two strips 60 yards for a touchdown to cut the Panthers deficit to 25-21 at the break.

James Gorham had another impressive performance, rushing for 162 yards and two touchdowns on the night. Zakkai Wilson added to his touchdown total on the season, notching his 15th of his senior season Friday evening. The coaching staff is deserving of recognition for their second half adjustments, holding the Knights to just one touchdown in the second half, after giving up four touchdowns in the first.

The Pungo Raiders notched their first win of the season on Friday night with a route of Community Christian Academy in Wilson. The Raiders scored on a long pass from Tristan Mann to Ryan Bishop for a 45-yard score in the first quarter. Bishop would go on to score four touchdowns in the game, three of them coming on the ground. Dylan Simmons picked up a rushing touchdown, and Stephen Pugh capped all scoring with a 50-yard touchdown catch and run late in the game. Edward Credle also caught a few passes in the game, and collected a couple of fumble recoveries.

There were plenty of impressive performances around Beaufort County on Friday night, and team’s hope to carry their momentum forward into the home stretch of the regular season.