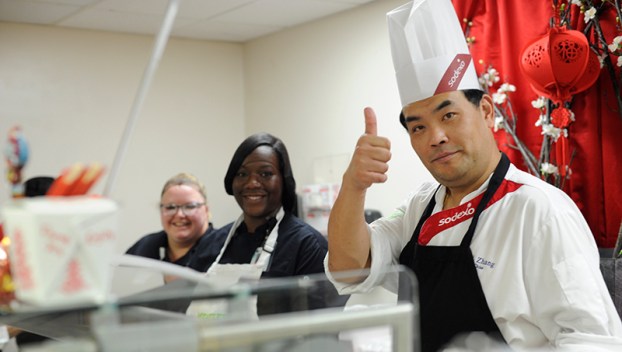 Diners at Vidant Beaufort Hospital’s cafeteria got a true taste of China this week.

Guest chef Qi Zhang served up shrimp tempura on Monday and shrimp fried rice on Tuesday as part of a global exchange of taste and tradition, recipes and cooking practices. Parent company Sodexo, which provides food service operations on a global scale — including through the Vidant Health system — offers the month-long international chef residency to its top chefs worldwide.

Battle cooked alongside Zhang on Monday and Tuesday; on Thursday and Friday, Zhang will again be doing demonstrations and cooking lunch, this time for those dining at Vidant Medical Center in Greenville.

In their off hours, Battle is also introducing Zhang to American cuisine with an eastern North Carolina culinary tour including Greenville restaurants Starlight Café and Ford and Shep in Greenville and The Bank Bistro in Washington.

Through interpreter Hui Wang, Zhang said he’s enjoying his food experiences and described the meals he’s had as healthy. 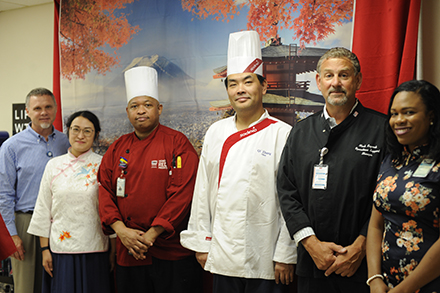 Zhang has worked for Sodexo for 18 years, but as head of the food services program at the hospital in China, he had not had time to take part in the Global Chef Program before now. While he’s been to many European countries, this is his first trip to the United States. However, he said he plans to return with his wife to visit Yellowstone National Park next year.

Zhang said he was impressed with both Vidant Beaufort Hospital and kitchen protocol. He said he’ll be taking the practices of washing hands immediately after entering the kitchen and wearing gloves back to his hospital in China. In addition to exchange of culinary cultures and flavors, the exchange of best practices is part of the program, as well, according to Battle.

For those who’ve had the opportunity to sample Zhang’s cooking, Battle said the results have been overwhelmingly positive.

“People are saying they better see this again on the menu,” Battle laughed.

Karen a reminder that hurricane season is not over

Eastern North Carolina isn’t out of the woods yet when it comes to hurricane threats. Tropical Storm Karen has maximum... read more