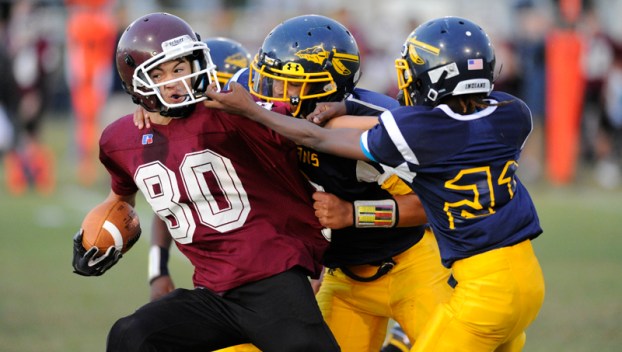 FIGHTING OFF TACKLERS: Bath Elementary’s Austin Frazier (#80) tries to fight off My’Quan Clark (#21) and Jamie Corprew (#9) during the Pirates’ game against the Indians. Chocowinity went on to win the game, 46-0. (Ashley Vansant / Daily News)

CHOCOWINITY — The Indians defeated the Bath Elementary Pirates, 46-0, on Wednesday evening in a battle of undefeated football teams.

Chocowinity moved the ball down the field and scored on a fourth-and-two play from the 25-yard line, with seventh grade quarterback Ja’Von Williams taking the bootleg in for the score.

The Bath offense was able to move the ball down the field on multiple occasions but couldn’t quite cash in for points.

Jamie Corprew scored a couple of rushing touchdowns on the evening, as well a blocked punt scoop and score. Williams blocked the punt at Bath’s one-yard line. Tequon Moore scored a touchdown and couple of two-point conversions on the night, as the Indians continue their undefeated season and will clinch the conference with a victory over St. Peter next Wednesday evening.

“We came in here and did what we wanted to do,” Corprew said after the game. “Defensively, we did really good. Offensively we were a little shaky at the start but we turned it around and did what we did.”

The running game was working for the Indians, but the windy afternoon on the south side of the river prevented either team from throwing the ball down the field successfully.

“The run game was working, outside run, they were clogging the middle so we just bounced it outside. We really couldn’t throw it a lot, though,” Williams said after the victory.

Head coach Alan Swain said he was excited for his team to continue on their winning streak, and said the game plan was simple.

“Teams are starting to realize we like to run the ball outside a lot, so the plan was to pound it up the middle to start with. Get them to tighten it up and go back to our bread and butter on the outside,” Swain said. “We got St. Peter next week and they haven’t lost a game, yet. So (next Wednesday) we’ll try to seal the deal.”