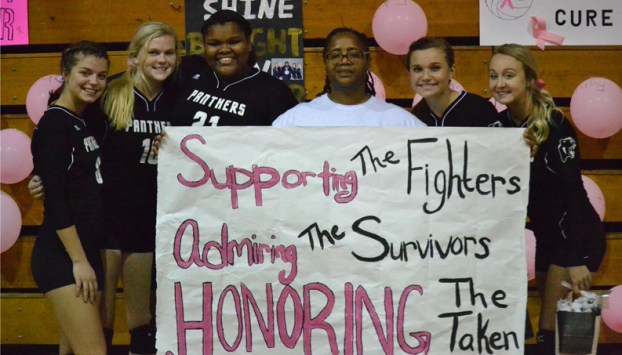 PINETOWN  — Tears were shed and happiness was exalted on Thursday night in Northside’s predominantly pink gymnasium, as the Lady Panther seniors played their final home game of their high school careers in a 3-0 sweep of Southside, on Dig Pink Night.

The Seahawks played one of their better games of the season, as they played every set of the game relatively well and kept it close, but it was the Panthers’ night. Northside improved their record to (10-3, 7-3 Coastal Plains 1A), which is good for third-place in the conference.

With Riverside and Pamlico County in the same conference, it’s tough to top the two heavy-hitting squads, according to Panthers head coach Michelle Leathers.

“Overall we had a really good season. We’re still very young, even though we’ve got some seniors we’re starting three freshmen,” Leathers said. “(Throughout the season) I think we improved our serve and receive, our communication has improved, but it didn’t seem like it today. Overall though, I think we’ve improved a lot.”

Senior Katie Hopkins said that this past four years with the Lady Panthers volleyball team has been special.

“If coach (Leathers) hadn’t of stepped in my freshman year, there wouldn’t have been much for us to build on. She’s done an incredible job of learning the game and teaching us life skills that we need to know,” Leathers said. “The girls that I’ve grown up with (on this team) — it’s going to be really hard to say goodbye. I’m blessed to have been a part of this team. They got me through a lot of things.”

Panthers senior Elyse Brinn explained that her united as one this season.

“It was nice to be able to come out and play with the same group of girls that we’ve been playing with for years, but we got closer as a team,” Brinn said. “We have to work our communication more (heading into the playoffs). We have to play more as a team.”

The Panthers have one last regular season game on the schedule at first-place Pamlico County next Wednesday, before the NCHSAA announces the seeding and placement for the 1A State Tournament.