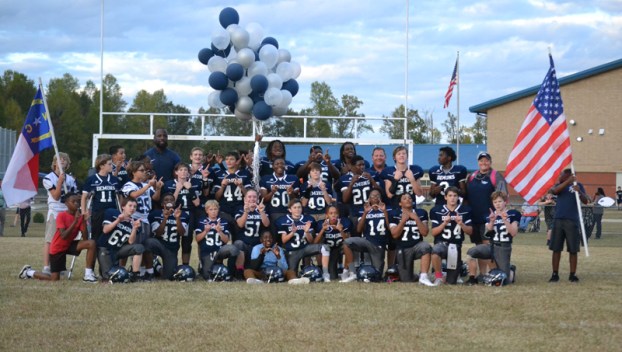 WINNERS: The P.S. Jones Middle School football team poses for a picture after their final home game of the season. The Demons won the game 42-12 over Eppes Middle School. (Mitchell Thomas / Daily News)

The Demons secured a spot in the top three of the conference with a 42-12 victory over CM Eppes Middle School on Thursday evening. With the victory, there is a three-way tie between Ayden-Grifton Middle, Hope Middle and P.S. Jones with 6-1 records.

Demons starting quarterback Spencer Davenport had a big game on Thursday evening, connecting for three passing touchdowns. Two of those touchdown passes were to Zy’Mari Perry, who also had two interceptions returned for a touchdown in the game. Joshua Gordon was responsible for the third touchdown reception.

“Our passing plays were working. Our running plays were all right, but I like when they throw it because that’s my style. I love catching the ball,” Perry said after the game. “I love this team and their attitude. Our work ethic is great, and our coaches show us love, bro. That’s love.” 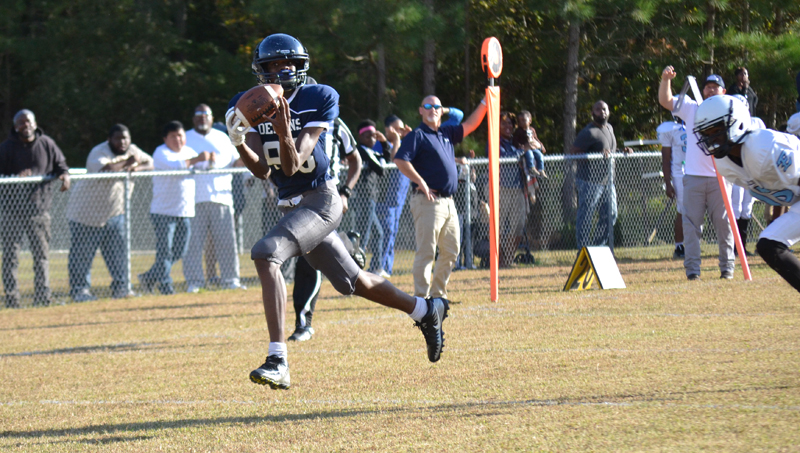 FINGERTIPS: P.S. Jones eighth grade receiver Zy’Mari Perry scores on one of his four touchdowns in the second quarter of the Demons’ win over Eppes.

Fullback Gary Payne also got in on the action with a few touches and a rushing touchdown on the evening as well.

The Demons defense settled into the game after allowing an early score. They created a few turnovers and owned the line of scrimmage throughout the game.

Cade Mixon was flying around the football field and picked up quite a few tackles from the secondary and on special teams.

“They never really ran the ball outside, but they always had twin (wide receivers) out there, because they liked to pass. That quarterback can throw it and he scrambles well, too,” Mixon said. “I just like getting through there and tackling people.”

The Demons stepped on the accelerator in the second half, scoring 22 points to put the game out of reach. Head Coach Elizabeth Dyer said plenty of things were working for her team on Thursday evening.

“They couldn’t stop our fullback up the middle. They had no answers for (Perry), either. We played them in our first game of the season so we kind of knew what to expect,” Dyer said. “We’re 6-1 now, hoping to be 7-1. I guess I’ll have to go see which players of mine are eligible. We’re playing on Tuesday next week, so we’ll only get one day of practice before we play.”

In the fourth quarter both teams got into a bit of an altercation, but the coaches and officials separated the kids and prevented it from getting out of hand. No punches were thrown, but yellow flags littered the field. All penalties offset one another.

P.S. Jones lost to Hope Middle earlier in the season, 16-8, giving Hope the tie-breaker over the Demons for first place in the division.

With one game remaining, a couple of things must go right for the Demons to win the conference outright. Hope would have to lose to 0-6 Chicod Middle, while Ayden-Grifton would need to lose to A.G Cox. P.S. Jones would also have to win their remaining game against Greene County at home Tuesd

By LAEIKE ABEBE   All of the hard work has paid off for the Washington cross-country team. The Pam Pack... read more