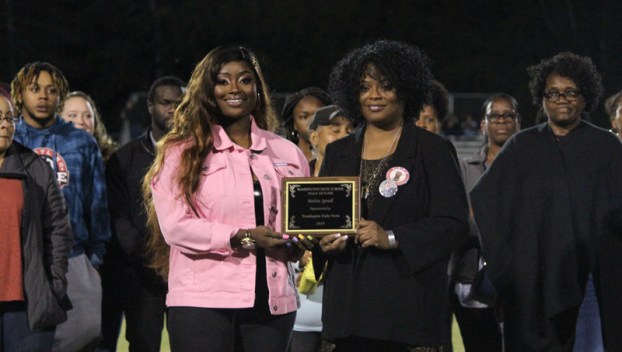 WALK OF FAME: The newest Washington Walk of Fame member, Melvin Spruill, was recognized at halftime of the Ayden-Grifton football game. His sister Tekearah Spruill (left) and his mother Trisha Spruill (right) accepted the plaque on Melvin’s behalf, as he passed away while on duty last year. (Laeike Abebe)

The Pam Pack family opened up its arms for two new members of the Washington High School Walk of Fame. The late, Melvin Spruill, and Haley Hutchins were recognized at halftime of the Pam Pack’s football game against Ayden-Grifton a couple of weeks ago.

Washington Athletic Director Jon Blank was very pleased with the selections that the committee decided on.

“Melvin was an excellent student and one of the nicest young men I have ever encountered at Washington High School. He had such an enthusiasm about every thing and had one of the brightest smiles,“ Blank said. “He was one of the most memorable students to sit in the seats of WHS.”

Trisha Spruill, Melvin’s mother, accepted the Walk of Fame induction in Melvin’s place, as he was killed on duty last year as a member of the Army. 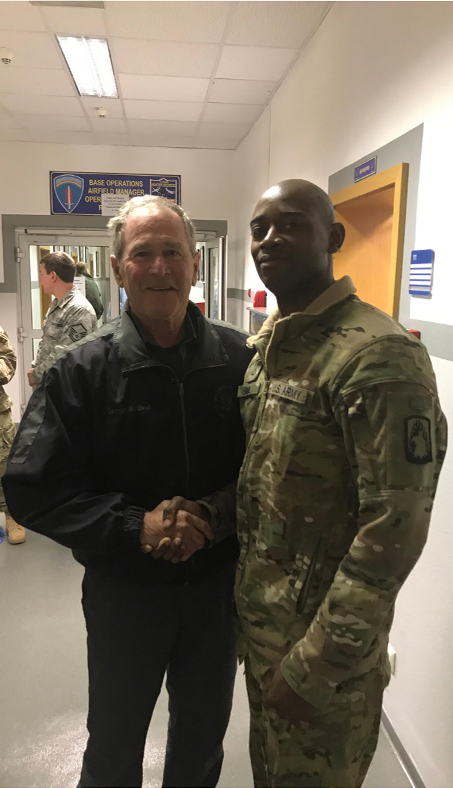 “I started crying,” Trisha Spruill said when she found out Melvin was selected for the award. “I wish that he was there to be able to receive it himself. My daughter and I were there to receive it for him and I held it together. I know he would’ve told me, ‘Mom, don’t you cry in front of all these people.’ So I held my tears until after I walked off the field. It means so much to me. More than words can express. I thank coach Blank, because my son looked up to him. He was like a father figure in his life.”

Melvin attended Washington High School from 2005-2009. He played football, ran track and wrestled for the Pam Pack. According to coach Blank, Melvin played safety and helped lead two of the best Pam Pack defenses and overall teams in the past 20 years.

“Because of his athletic success, academics and overall character, I highly recommend Melvin Spruill for the Walk of Fame. He is deeply missed at Washington High School and should be immortalized with a stone in the wall that honors the best of those who contributed positively to Pam Pack athletics.” Blank said in a submission letter to the committee.

Hutchins was an automatic qualifier to be a member of the Walk of Fame, according to Jim Kozuch. She was a four-year starter for the Pam Pack. She won pitcher-of-the-year twice. She also won co-conference player-of-the-year, offensive player-of-the-year and conference MVP during her time playing softball at Washington. Her career batting average hovered around .450. 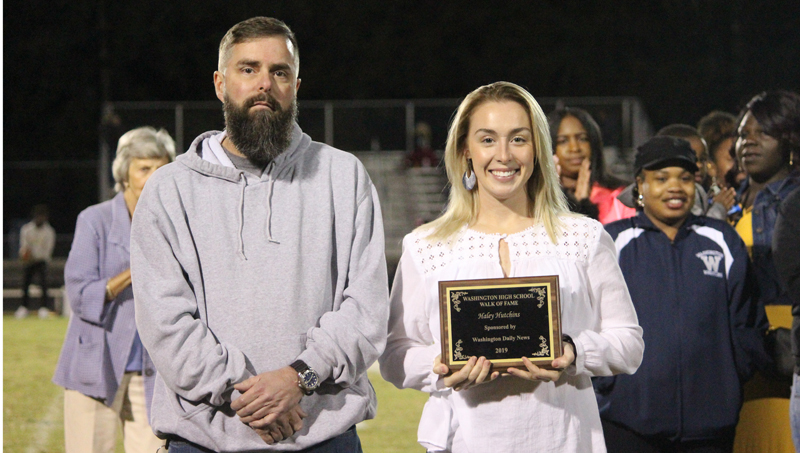 Hutchins went on to play collegiately for Radford University, Louisburg College and finished up her last two years of eligibility at Campbell University.

“Yeah I’ve known Coach Kozuch for a long time. He was my P.E. teacher. He contacted my mom and she told me I was nominated for the Walk of Fame and I said, ‘What, really? That’s awesome,’” Hutchins said. “They were building the Walk of Fame while I was in school. That’s just awesome that I’m going to be a part of that. I am very, very appreciative of it, and I did not expect it whatsoever.”

It was a storybook type of ending for the Washington soccer team on Monday night, using a 40-yard free kick... read more