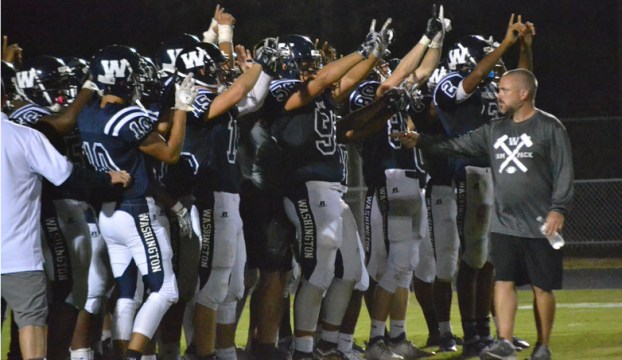 DUBS UP: The Washington football team throws up the W’s during halftime warm-ups against North Lenoir earlier this season. The Pam Pack play for a conference championship at West Craven on Friday night. (Mitchell Thomas / Daily News)

The final two weeks of the season brings a lot of uncertainty and excitement. The Pam Pack will be battling for a conference championship on Friday night at West Craven. Southside is trying to claw their way back into the playoff picture, and it starts with Riverside on Friday evening. The Panthers in Northside will host Tarboro, who continues their undefeated streak of 39-games coming into Friday night.

It’s senior night for the Panthers, but with the way they’ve played this season, it won’t be the last time they play a game in Pinetown this season. Northside (6-3, 3-1 Coastal Plains 1A) has been impressive this season, but Tarboro is a different animal. The Vikings (9-0, 4-0) are going to give it to one of their talented backs and run the football for four quarters. The Panthers are coming off of their most impressive defensive performance of the season, and they are hoping for some carry over into Friday night.

Luckily for the Panthers, they won’t have to face the Vikings in their state playoff run, as they are divided into subdivisions of 1A and 1AA.

It’s Homecoming for the Seahawks on Friday night, and the Seahawks haven’t played a home game since Tarboro came to town three weeks ago, so they’ll be fired up. Riverside (3-6, 1-3) is not a bad football team, but they’ve struggled defensively.

The Knights will try to beat opposing teams to the edge with their speedy wide receivers and backs. Their quarterback has the ability to find the open man, and the receivers can go up and get it.

However, the Seahawks offense has been clicking as of recently. The difference in the game will be Southside’s ability to keep the ball and eat away at the clock. The Seahawks are big up front and will match up well against a relatively undersized Riverside defensive line.

With their backs against the wall, the Seahawks get a much needed win and earn consecutive victories for the first time this season.

The West Craven offense under head coach Mike Twitchell has been the highest scoring in the conference through nine games. The Pam Pack average about 31 points per game to this point, and West Craven averages about 32.

The team with the better defense will win on Friday night, and each team has showcases solid defense so far this year.

This is the most intriguing game in eastern North Carolina this weekend. Not only is a conference title involved, but the winner will earn the higher seed and play at home for a larger portion of the NCHSAA 2AA State playoffs.

I can’t help but go with the hot hand. The Pam Pack is the only remaining undefeated team in the conference, and that continues through Friday night.

The Pam Pack family opened up its arms for two new members of the Washington High School Walk of Fame.... read more