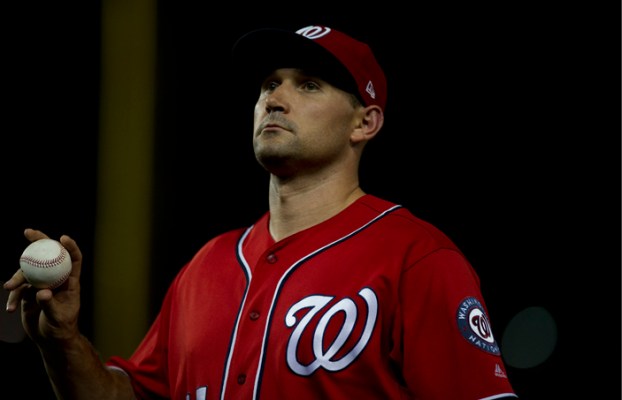 WORLD SERIES CHAMP: Washington, North Carolina’s very own Ryan Zimmerman warms up before a regular season game against the San Francisco Giants in 2017. Zimmerman won the World Series with the Nationals on Wednesday night with a 6-2 Game 7 victory over the Houston Astros. (Ashley Vansant | Daily News)

With an improbable 3-2 deficit going back into Houston, the Nationals chances to win the World Series looked bleak. Not a single home team won a game in the seven-game series. The Nationals fell behind early, but overcame a 2-0 deficit to win, 6-2 in Game 7 Wednesday evening.

Ryan Wallace Zimmerman, born in Washington, N.C. but was raised in Plymouth for the first few years of his life. He and his family moved to Virginia Beach in the early 1990’s, where his athletic talent fit in well with the Tidewater area of Virginia.

Zimmerman played for Kellam High School as a shortstop. He went on to play for the University of Virginia, where he was converted to a third baseman and didn’t skip a beat.

He was an All-American for the Cavaliers, with a batting average of .393 during his junior season. He declared for the draft and was selected fourth overall by the new Nationals baseball club in 2005. The Nationals had just revamped baseball in D.C., and Zimmerman was the first draft pick.

The Nationals finished 81-81 in their first season. Zimmerman played with the likes of Alfonso Soriano, Vinny Castilla, Nick Johnson, Jose Videro and a pitching staff led by Livan Hernandez and Chad Cordero.

Castilla was a long time veteran, playing for the Braves, Rockies, Devil Rays and Astros before ending his career with Nationals. The organization chose Zimmerman over the two-time All-Star. Now, Zimmerman just completed the 14th season with the same ball club that saw promise in him as a rookie.

The 35-year-old Zimmerman played a huge role in the Nationals World Series run. He hit for a .255 clip with two home runs, seven RBIs and five runs. The Nats were down to their final out in the Wild Card game against the Brewers, and Zimmerman’s broken bat single extended the game. The Nats won it on the next at-bat with 20-year-old Juan Soto lacing a single into right field.

In the National League Division Series, Zimmerman’s three-run homer against the Dodgers would be the difference in Game 4, and tied the series at 2-2. The Nats won game five over the league-best Los Angeles Dodgers, swept the Cardinals and took seven games to finish off the Astros and win their first World Series in the organization’s history.

Zimmerman made a huge impact for the Nationals in their 14-year history. It just goes to show, you can be from the smallest town, and still have an opportunity to change the world, even right here in little ole Washington, North Carolina.

In an absolute thriller of a soccer game, the Washington Pam Pack prevailed over the Greene Central Rams, 6-5, on... read more