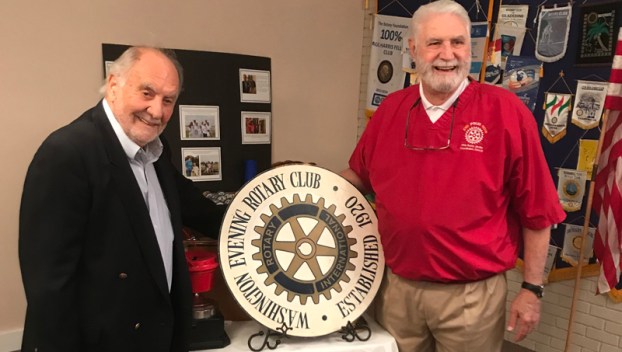 The Washington (evening) Rotary Club met Thursday night at the Washington Yacht & Country Club. Bill Wall extended greetings and called the meeting to order. After the meal, program director Rocky Jacobs introduced the guest speaker for the evening. Rocky has served Rotary in many capacities and has been very involved for a number of years in the Global Polio Eradication Initiative. Oct. 24 was World Polio Day and is a very important date every year to Rotary clubs worldwide. Rocky introduced Michael “Mike” Buzzeo as guest speaker. Mike is a member of the Washington (noon) Rotary Club and is a polio survivor. He contracted polio when he was only 3 years old. Mike is now 90 years old, and he described his youth during the Great Depression and dealing with polio. He is a very fortunate man to have survived this dreaded disease at a time when very little was known about it. After an informative program, Mr. Buzzeo answered questions and was presented the highly coveted Rotary pen for a job well done. In closing members recited the Rotary four-way test.

Down East Seniors hear stories of Washington past

The Down East Seniors Club met at The Blind Center of North Carolina on Wednesday at 10 a.m. The meeting was... read more