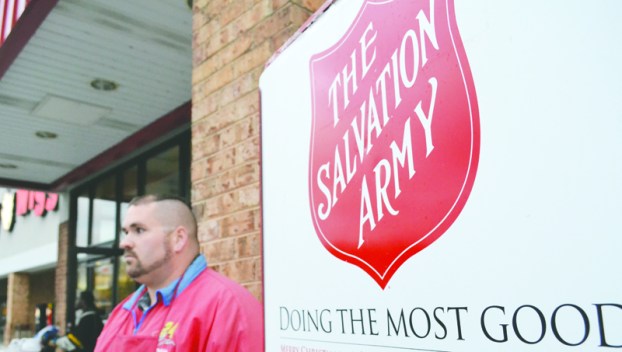 DOING GOOD: Angel Trees and red kettles will soon appear at local shopping establishments throughout Beaufort County and the surrounding areas. Through these efforts, The Salvation Army seeks to provide a merry Christmas to children in need, and proceeds from the red kettles help provide everything from social services to local disaster relief. (The Daily News)

While Christmas is still 49 days away, The Salvation Army of Washington is already getting in the holiday spirit this week, kicking off two of its most popular annual programs.

Throughout the Christian nonprofit’s service area, Christmas trees will soon be popping up, each decorated with special ornaments. Hanging on the boughs of these “Angel Trees” are tags showing the Christmas needs and wishes of boys and girls in the area. With each, The Salvation Army has committed to providing Christmas gifts for that child, relying on donations from the community.

“We’ll be putting them on trees at both Walmarts that we cover in the next day or two,” The Salvation Army of Washington Lt. Karl Bush said.

Bush says there are already a number of local churches and businesses that have signed up to sponsor Angel Tree children this holiday season. Those interested in sponsoring one or more children can visit Angel Trees at Walmart locations in Washington and Williamston, or contact the organization directly at 252-946-2523.

This weekend, The Salvation Army will be on hand at both Walmart locations from 9 a.m. to 6 p.m. for an Angel Tree toy drive.

In addition to gift suggestions and Angel Tree tags for shoppers, the nonprofit has also created a gift registry on Walmart’s website from which shoppers can purchase toys and gifts to supplement program. Purchase from the registry will automatically shipped to The Salvation Army offices in Washington for distribution.

“We’ve placed items on the registry that we tend to normally have an issue getting,” Bush said. “For instance, with the small amount of items that were left from last year, the sections for 10-to-12-year-old boys and girls are empty, so a good bit of the items on the registry are for that age range. Businesses, churches and individuals tend to choose younger children to adopt for Angel Tree.”

To check out the Angel Tree gift registry, search “The Salvation Army Washington” at www.walmart.com/cp/3774807.

Of course, no Christmas would be complete without the sounds of Salvation Army bells in the air. Starting this weekend, the nonprofit’s signature red kettles will appear at local shopping establishments throughout the region. One of The Salvation Army’s biggest fundraisers of the year, the bell ringing campaign makes up a significant portion of the nonprofit’s local budget.

“That helps us if we have the need to purchase toys for Angel Tree, our general operations like social services and the various things we do throughout the year,” Bush said. “Most of the time it carries us through the summer, which is our dry time and then we start picking back up in late September. It tends to help us throughout the year.”

While the red kettles themselves are a holiday classic, this year The Salvation Army is making it easier than ever to donate. A new feature called Kettle Pay will allow donors to scan a QR code or use their cell phones to donate. In an increasingly cashless society, the nonprofit hopes this will offer new options for those interested in supporting its mission.

Now in its second year, local businesses will also have the chance to sponsor local kettles at the cost of $1,000 per sponsorship. These funds will in turn be used to offset the cost of paying bell ringers throughout the holiday season. With 10 sponsors, The Salvation Army will be able to cover the cost of bell ringers for the year.

“We have to hire people to ring the bells because we don’t have enough volunteers to do that,” Bush said. “Last year, our volunteers brought in about 55% of the income we had, and we have to pay people to raise the rest of the money.”

City of Washington water customers may see some brief drops in pressure and cloudiness in their tap water as public... read more