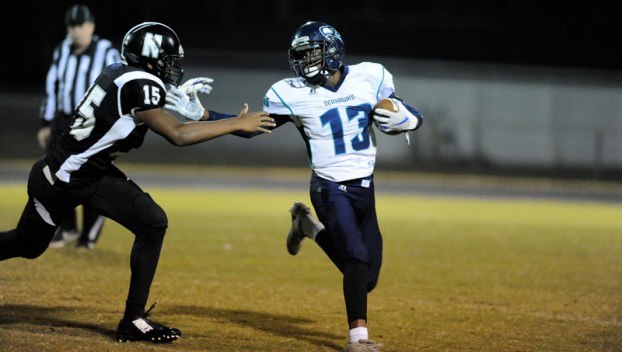 The final week of the regular season is now on the horizon. Each of the three Beaufort County high schools are now solidly in the mix of playoff conversation, and two teams will likely host games to begin the playoffs. Washington will have Senior Night at J.G. “Choppy” Wagner Stadium on Friday night against Greene Central, while the Anchor Bowl takes place in Chocowinity. Northside and Southside could potentially be battling for a home playoff game, with the loser likely traveling.

The Pam Pack (7-3, 5-1) is coming off a disappointing loss to West Craven last Friday night for an outright conference championship. However, with a win over the Rams, they will earn a share of the 2A Eastern Carolina Conference crown. They won’t be able to earn the No. 1 seed for the playoffs, but they will have earned at least a share of the conference title for the first time since 2014.

Greene Central (4-6, 2-4) start to the season was bright. After dropping their first two contests, they went on to win four of their next five games. However, the last three weeks the Rams have been held without a score.

First-year head coach Jason Wilson has the Rams heading in the right direction, but injuries have plagued Greene Central this season.

Junior quarterback Cole Dawson had thrown for over 1,000 yards on the season before he was injured. He hasn’t played since early October.

With that said, the Pam Pack shouldn’t have many problems stopping the Rams’ offensive attack, and the Washington offense will roll.

The “Anchor Bowl.” These two Beaufort County teams are likely battling for a home playoff game on Friday night.

It means more than that, though. This is for bragging rights. This is for pride. The team that wins gets to puff their chest out and flex their muscles for the next 52 weeks. Throw the records out the window. This is going to be an all out brawl Friday evening in Chocowinity.

The all-time record between these two squads is 13-6 in Southside’s favor. Northside has been solid this season. They began their season 3-0 with wins over Perquimans, North Duplin and Camden County. The Panthers also had a fourth quarter lead over Washington before giving up a couple of touchdowns. Despite a few injuries, the Panthers have remained good up front with a physical defensive line. The young linebackers have settled into their positions through this point of the season and the back end has played well.

Offensively, they have mixed it up well. Carter Boyd is 139 yards away from being the first 1,000-yard passer in Northside’s football history.

Southside (4-6, 2-3) has battled through some adversity and struggles this season, but they have won some timely football games to keep them in the playoff conversation.

The Seahawks lost their first three games before getting a huge home win over North Duplin. Then, they defeated Perquimans on the road in a 58-52 barnburner. Hundley Stallings scored the game-winning touchdown with three seconds to spare. The Seahawks lost Tarboro and Pamlico County, but responded with victories over Jones Senior in a forfeit, and a 22-20 win over Riverside last Friday.

Southside has battled the injury bug this year, but their offense continues to score points. Sophomore Kenjray Coffield has burst onto the scene and had a stellar season, as well as senior backs Jamari Nelson and Davion Carter.

I expect this to be a defensive battle. With a week’s preparation for two teams that already know each other very well, I wouldn’t expect this game to be a high-scoring affair.

With a Northside victory, they will likely host one or two games in the playoffs before having to travel. In the latest projections from HighSchoolOT.com, they are listed a 6-seed and hosting Perquimans in the first round. A loss would likely force them to travel in the first round. A Southside victory could result in the Seahawks hosting a playoff game. They are currently listed as a 9-seed, traveling to Gates County. A loss, and they will certainly travel. Both teams are likely locks for the playoffs, but Northside has the edge this year.