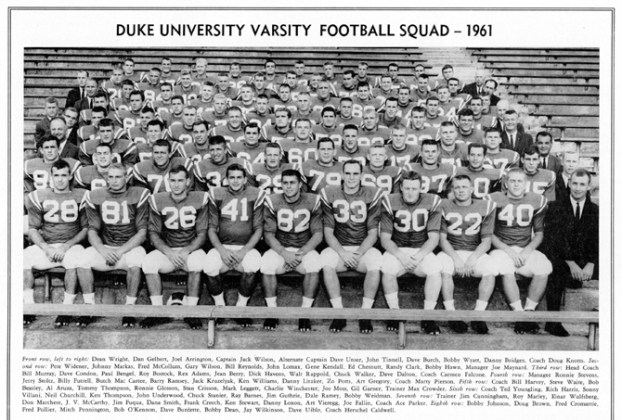 TEAM PHOTO: The 1961 Duke Blue Devils pose for a team photo prior to the season. Washington’s Zo Potts (fourth row, third person from the right) scored his only touchdown of his career against the Irish in December of the 1961 season. (Duke University Archives)

The Duke Blue Devils host the Notre Dame Fighting Irish this weekend, Nov. 9 at 7:30 p.m. This will mark only the sixth time ever the Irish and Blue Devils have faced off, and the first time they will play in Wallace-Wade Stadium since 1961. It will only be the second time ever the two have played in Durham.

That last matchup in Durham on Dec. 2, 1961 showcased Washington’s very own, Zoph Potts. He was a graduate from Washington High School in 1959. He made a trip to the State Championship game in his sophomore season with Washington, but the Pam Pack couldn’t come away with the victory.

In the second quarter of the Blue Devils game in 1961, Potts recalled the only touchdown of his college career against the Irish.

“We were getting close to the half, and they called a play for a pass to Stan Crisson, one of our swing ends. Our quarterback at the time Gil Garner threw the ball, but there were three Notre Dame defenders crowded around him. So I said to myself, ‘Something is going to happen to that ball, and I’m going to run over there and see if I get lucky.’ So I got behind those guys, it sure enough was batted and all I had to do was watch it into my hands. That was a big thrill,” Potts told The Daily News. “I’d never seen Coach (Bill) Murray so happy after the game. He went up to every player, shaking their hands and told them they had just taken part in something special that they would never forget.”

The Blue Devils went on to win that game, 37-13. Head coach Bill Murray had pulled off a victory over a Notre Dame team that was ranked as high as sixth in the country that season.

“(Notre Dame) was a team you grew up dreaming about beating or playing for,” Potts continued. “They had some real good ball players. Nick Buoniconti and Daryle Lamonico both played for them and went on to play NFL ball, but that day it was just our day.”

Potts went on to win the Atlantic Coast Conference three years in a row with the Blue Devils, and won the Cotton Bowl over Arkansas in a 7-6 slugfest in 1961. 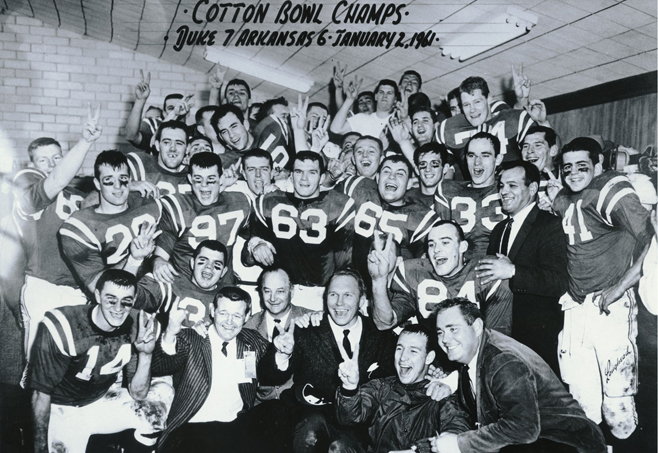 “That may be hard to believe to those that watch the Blue Devils today, but that was about the end of the line before things started slipping. But coach (David Cutcliffe) is doing a good job there now. We’re very fortunate to have him,” Potts said.

Duke may not be the powerhouse it once was back in the day, but they have improved immensely since Cutcliffe has taken over.

Notre Dame has been an enigma the past decade or so, despite making the College Football Playoff a year ago. The last couple of times these two faced off, resulted in a 38-35 Blue Devil victory in 2016, and a 28-7 Irish win in 2018.

This year’s game will be televised on the ACC Network on Saturday evening at 7:30 p.m.

The final week of the regular season is now on the horizon. Each of the three Beaufort County high schools... read more