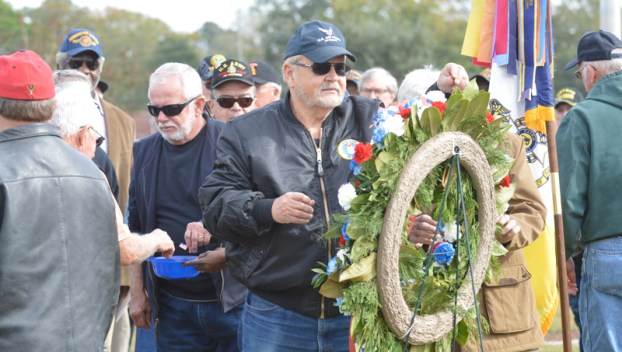 Annual ceremony honors those who served

Exactly 100 years ago yesterday, U.S. President Woodrow Wilson declared the first Armistice Day, one year after the First World War ended at the 11th hour of the 11th day of the 11th month.

This was the beginning of what today is celebrated as Veterans Day, and for 35 years, the American Legion Unit 15 Auxiliary has marked that holiday with a tribute to local veterans, offering thanks for their services and sacrifices.

Together with American Legion Auxiliary Unit 263, the group saluted local men and women who served, and continue to serve,  America with a special program at Veterans Memorial Park in Washington on Monday.

From veterans of World War II to the current conflicts in the Middle East, service members represented nearly every branch of the United States Armed Forces during the program. ALA Unit 15 President Betsey Lee Hodges served as the keynote speaker.

“How should we celebrate Veterans day?” Hodges asked. “Remember the Vietnam veterans when they came home and how unappreciated they were? We don’t want that to ever happen again to any of our military. We want all veterans, including the Vietnam veterans, to know that they are appreciated and we do thank them for their service. One of the things we can do as we celebrate is make sure we say ‘thank you’ to all veterans. A simple handshake is all that it takes.”

From PTSD to homelessness, Hodges spoke of the many issues veterans face upon returning home. She encouraged those in attendance to be mindful of their struggles, to offer thanks for their service and to respect the American flag.

At the conclusion of the service, veterans were asked to come forward, and each was invited to attach a small American flag to a wreath in memory of a friend who might not have come home. Following, each branch of the service was recognized with their respective songs.

“Remember, freedom is not free,” Hodges concluded. “Someone payed the price some way. Some paid part of their lives, but some gave all so we can be here and have the choices that we do.”